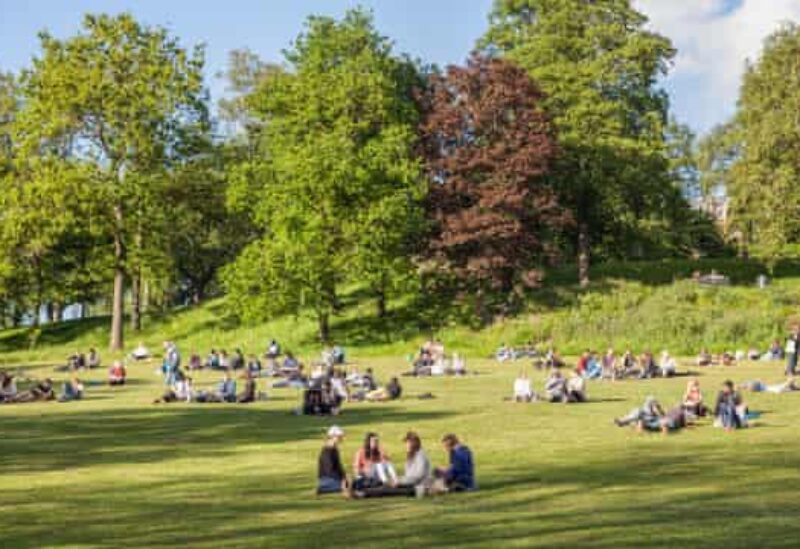 Britons have been urged not to gather in large groups in parks and beauty spots on Friday’s bank holiday despite the easing of coronavirus restrictions.

Police in London warned that ‘we cannot allow the selfish actions of a small minority of people to jeopardise the efforts of this city’ in reining in the spread of Covid-19.

Pictures have shown people flocking to UK parks since the latest stage of lockdown easing began on Monday, meaning people are no longer required to stay at home and can meet in groups of six outdoors

However, Met Office forecasters say the weather will be cooler on Good Friday, with conditions ‘changing dramatically’ over the Easter weekend after a spell of warm weather.

London’s Metropolitan Police said it will be shutting down illegal gatherings such as house parties or unlicensed music events.

Police officers will be ‘highly visible’ in parks and other parts of London and intervening to break up groups of more than six, they said.

Deputy assistant commissioner Jane Connors, who is leading Scotland Yard’s response to Covid-19, said: “While we welcome the limited relaxation of rules, we don’t want to become complacent.

“We are hugely grateful to the vast majority of Londoners who have played a vital part in controlling the spread of the virus up to now. After a long and difficult few months, let’s not undo all of that hard work now.”

She added: “We cannot allow the selfish actions of a small minority of people to jeopardise the efforts of this city.

“We will continue to shut down house parties or dangerous raves quickly, taking enforcement action by handing out fines.

“We make no apology for our tough stance on shutting down those large gatherings which pose a serious risk to public health.”

Dr Katherine Henderson, president of the Royal College of Emergency Medicine, warned on Friday that “we’re still very much in Covid mode”.

“I think the message ‘let’s not blow it now’ is the really key thing,” she told Sky News on Friday.

“The number of hospital admissions are going down but there still will be asymptomatic spread going on in the community.

“The loosening of restrictions means that maybe vulnerable people will encounter people who have got Covid but are asymptomatic or minimally affected, and that’s the risk.”

London has seen a significant drop in infection and death numbers from Covid-19 since the third national lockdown was imposed in January.

Under government plans, the next stage of lockdown easing is due on April 12 when shops will be able to re-open and hospitality venues will be allowed to serve customers outdoors.

The plans set out by Prime Minister Boris Johnson in February envisage that people could be allowed to meet indoors again from May 17.

The government hopes to end all legal restrictions on social contact by June 21.