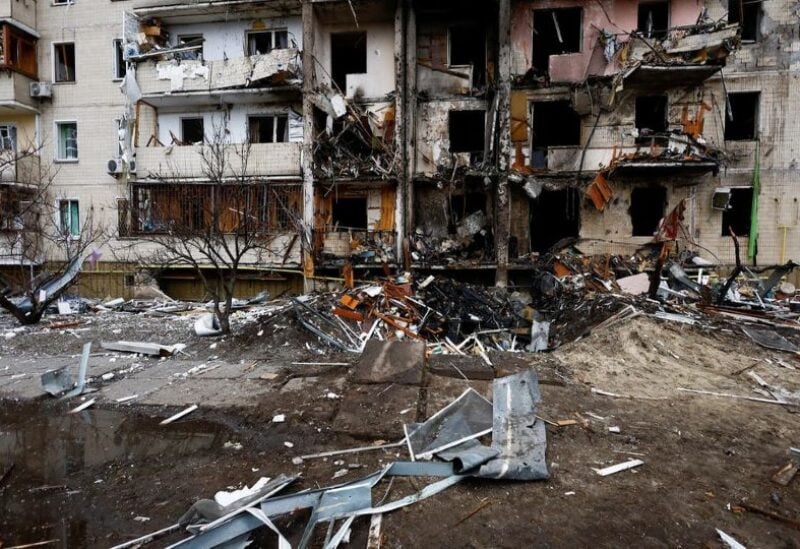 A damaged residential building is seen, after Russia launched a massive military operation against Ukraine, in Kyiv

Prime ministers of Poland, Czech Republic and Slovenia arrived in Kyiv by train, to express EU solidarity as Russia continues its assault on Ukraine’s capital city.

Polish Prime Minister Mateusz Morawiecki shared a photo from Kyiv on social media after arriving, saying “It is here, in war-torn Kyiv, that history is being made. It is here, that freedom fights against the world of tyranny. It is here that the future of us all hangs in the balance.”
The leaders met with Ukrainian President Volodymyr Zelenskyy and Prime Minister Denys Shmyhal, having gone in their capacity as representatives of the European Council.
Jaroslaw Kaczynski, deputy PM and leader of Poland’s ruling PiS party, called for an international peacekeeping mission be sent to Ukraine and for it to be given the means to defend itself.

“I think that it is necessary to have a peace mission – NATO, possibly some wider international structure – but a mission that will be able to defend itself, which will operate on Ukrainian territory,” Kaczynski said.

“It will be a mission that will strive for peace, to give humanitarian aid, but at the same time it will also be protected by appropriate forces, armed forces,” he added.

NATO itself and various western leaders, including US President Joe Biden and German Chancellor Olaf Scholz, have so far ruled out sending Alliance troops to Ukraine in any capacity.

Morawiecki said in a tweet ahead of the visit that “Europe must guarantee Ukraine’s independence and ensure that it is ready to help in Ukraine’s reconstruction.”
According to Poland’s presidential aide Michal Dworczyk, the leaders were also expected to present an EU aid package for Ukraine, agreed at a recent summit in Versailles.

“In Kyiv, in addition to a strong signal of support for Ukraine, a concrete support package will be presented by the prime ministers,” Dworczyk said.

Czech Prime Minister Petr Fiala said in a tweet: “The aim of the visit is to express the European Union’s unequivocal support for Ukraine and its freedom and independence.”
Slovenian Prime Minister Janez Jansa said in a tweet that “there is no country on the whole of our continent that is more European than Ukraine,” and thanked Ukrainians for defending “European values” with their lives.
The three countries are all EU member states and also members of the NATO alliance. Over the weekend, EU leaders made it clear that there could be no shortcut to EU membership, following thetwo-day informal summit at the Palace of Versailles in France.

Germany’s Scholz backs trip
German Chancellor Olaf Scholz has welcomed the trip, saying it was “good to try and help in different ways in this situation.”

He added that it was important to continue discussions with Zelensky, but also with Russian President Vladimir Putin to encourage a ceasefire.

“We are all engaged in different ways, and that is how it ought to be,” he said.

The leaders of the 27 EU member states did pledge military aid amounting to €1 billion ($1.1 billion).

At last week’s two-day summit, European Commission President Ursula von der Leyen said Ukrainians were exercising “their right to choose their own destiny” by starting the process to join the EU.