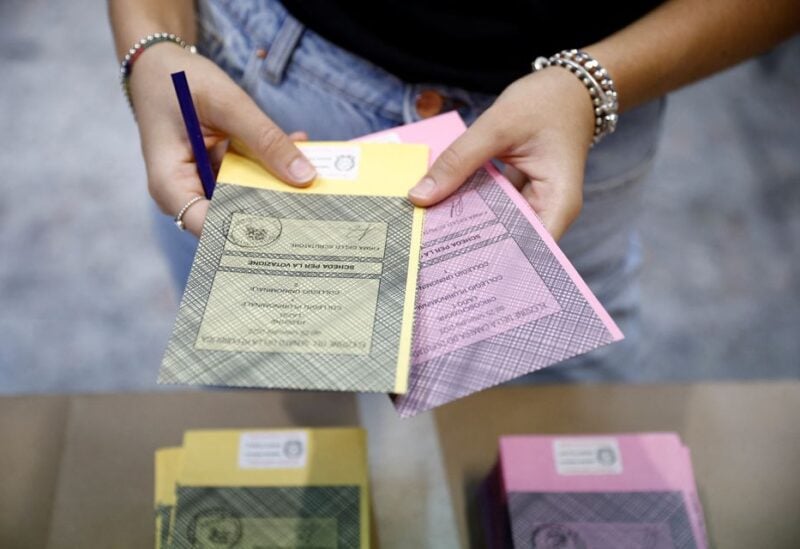 A person holds out ballots at a polling station during the snap election, in Rome, Italy, September 25, 2022. REUTERS

Italy’s polls opened on Sunday in an election that is expected to return the country’s most right-wing administration since World War II and usher in the country’s first female prime minister.

However, due to the complicated computations necessary by a hybrid proportional/first-past-the-post election legislation, an accurate seat count may not be available for many hours.

When the most recent opinion surveys were released two weeks ago, a right-wing alliance led by Giorgia Meloni’s Brothers of Italy looked to be on track for a convincing victory.

However, with a polling blackout in effect for the two weeks leading up to the election, there is still room for a surprise.

Support for the left-wing 5-Star Movement, the largest party in 2018, has reportedly increased in recent days.

A late surge by 5-Star could jeopardise the rightist alliance’s chances of winning a majority in the Senate or upper house, complicating the process of forming a government.

Even if there is a clear cut result, the next government is unlikely to take office before late October, with the new parliament not meeting until Oct. 13.

Meloni would be the obvious candidate for prime minister as leader of an alliance also featuring Matteo Salvini’s League party and Silvio Berlusconi’s Forza Italia.

That would cap a remarkable rise for Meloni, a 45-year-old from Rome whose party won only 4% of the vote in the last national election in 2018.

Italy has a history of political instability and the next prime minister will lead the country’s 68th government since 1946 and face a host of challenges, notably rising energy costs.

The outcome of the vote will be closely monitored in European cities and on financial markets.

Leaders in the European Union, eager to maintain unity in the aftermath of Russia’s invasion of Ukraine, are afraid that Italy may be a more unpredictable partner than under former European Central Bank director Mario Draghi.

Markets are concerned about Italy’s capacity to handle a debt load equal to almost 150% of GDP.

Meloni downplays her party’s post-fascist roots, portraying it as a mainstream conservative organization. She has committed to support Western policies in Ukraine while avoiding unnecessary risks in an economy beleaguered by rising costs.

On foreign policy, however, there are hints of discord between Meloni and her friends.

Salvini, the League’s leader, has criticized the impact of increasing energy costs on Italians, attributing it in part to the fallout from Western sanctions on Russia. Late in the campaign, Berlusconi appeared to defend Russian President Vladimir Putin, causing anger.