Pope apologizes in Canada for ‘evil’ of residential indigenous schools 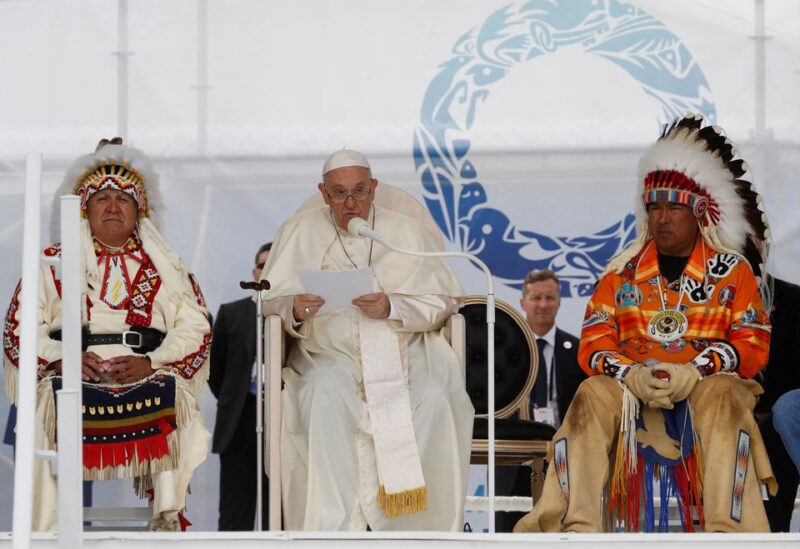 Pope Francis apologizes to indigenous people for the residential school system in Canada during his visit to Maskwacis, Alberta, Canada July 25, 2022. REUTERS/Todd Korol

Pope Francis delivered on his commitment to publicly apologize to Canada’s native people for the Church’s involvement in the torture of indigenous children in schools, calling forced cultural assimilation “evil” and a “disastrous error.”

Francis expressed regret for Christians’ participation in the “colonizing mentality” of the time while speaking close to the location of a former school. He demanded increased support for survivors and descendants’ healing as well as a “serious probe” into the alleged residential schools.

“With shame and unambiguously, I humbly beg forgiveness for the evil committed by so many Christians against the indigenous peoples,” Francis told indigenous leaders from the First Nations, Metis and Inuit people.

The 85-year-old pope is making the week-long apology tour of Canada to fulfill a promise he made to indigenous delegations that visited him this year at the Vatican, where he made the initial apology.

“I ask forgiveness, in particular, for the ways in which many members of the Church and of religious communities cooperated, not least through their indifference, in projects of cultural destruction and forced assimilation promoted by the governments of that time, which culminated in the system of residential schools,” he said.

Between 1881 and 1996 more than 150,000 indigenous children were separated from their families and brought to residential schools. Many children were starved, beaten and sexually abused in a system that Canada’s Truth and Reconciliation Commission called “cultural genocide.”