Pope arrives in Canada on tour of ‘penance’ for indigenous abuse 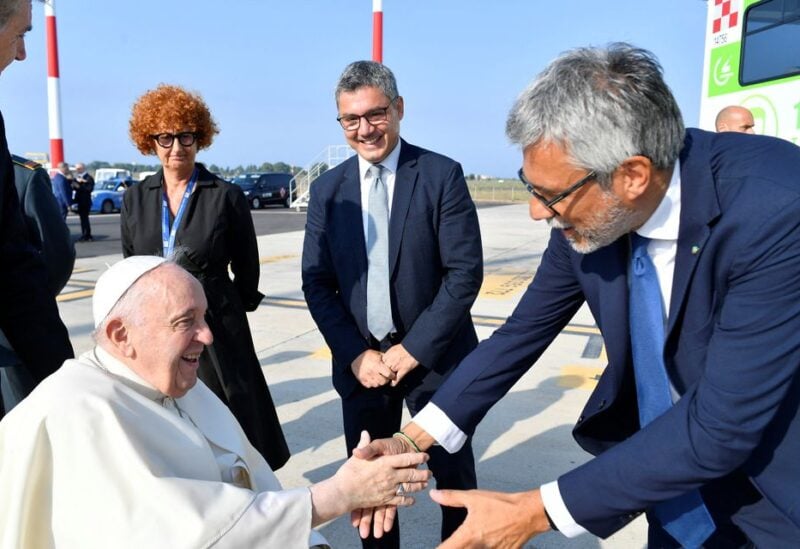 Pope Francis greets a person as he arrives to board a plane for his visit to Canada, at Rome–Fiumicino International Airport in Fiumicino, Italy July 24, 2022. Vatican Media/Handout via REUTERS

Pope Francis arrived in Canada to begin a five-day visit that will be focused on issuing an apology on behalf of the Roman Catholic Church for the abuse that indigenous children suffered in mostly-church-run residential schools.

“This is a journey of atonement. Say that’s the spirit of it “Following the departure of his flight from Rome, the pope made his customary remarks to the media.

He touched down in Edmonton in the western province of Alberta, where he will visit a former residential school and meet with indigenous peoples on Monday. He is also visiting Quebec City and Iqaluit, the capital of the territory of Nunavut. He will depart on Friday.

Aboard the papal plane, the pope said he yearned to visit Ukraine in his efforts to try and bring an end to the five-month-old war that he has repeatedly decried.

“I have a great desire to go to Kyiv,” the pope said when asked about a possible future trip to Ukraine.

In an exclusive interview earlier this month, the pontiff told Reuters that he hoped to be able to go to Moscow and Kyiv soon after his trip to Canada.

The first full day of his Canadian tour will be dedicated to indigenous peoples and the apology, with a Mass to be held in Edmonton’s Commonwealth Stadium on Tuesday.

Between 1881 and 1996 more than 150,000 indigenous children were separated from their families and brought to residential schools. Many children were starved, beaten and sexually abused in a system that Canada’s Truth and Reconciliation Commission called “cultural genocide.”

While Canada’s leaders have known about high numbers of children dying at the schools since 1907, the issue was thrust to the fore with the discovery of suspected unmarked graves at or near former residential school sites last year.

In response to pressure stemming from those discoveries, the pope apologized for the Catholic church’s role in the schools earlier this year during a visit by indigenous delegates to the Vatican.

Now he is coming to apologize on Canadian soil. But survivors and indigenous leaders have told Reuters they want more.

Many have called for financial compensation, the return of indigenous artifacts, the release of school records, support for extraditing an accused abuser, and the rescinding of a 15th-century doctrine justifying colonial dispossession of indigenous people in the form of a papal bull, or edict.