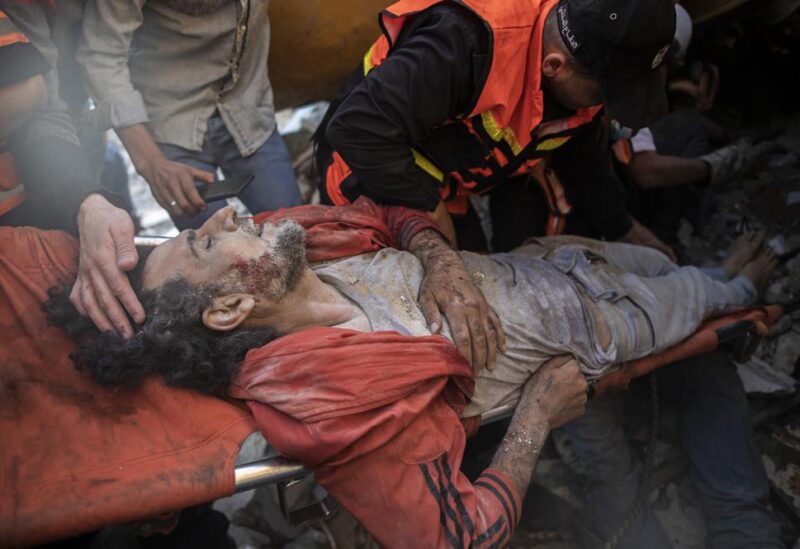 Palestinian rescuers pull a survivor from under the rubble of a destroyed residential building following deadly Israeli airstrikes in Gaza City, Sunday, May 16, 2021. The airstrikes flattened three buildings and killed at least 26 people Sunday, medics said, making it the deadliest single attack since heavy fighting broke out between Israel and the territory's militant Hamas rulers nearly a week ago. (AP Photo/Khalil Hamra)

VATICAN CITY: Pope Francis has denounced the “unacceptable” spiral of violence between Israel and the Palestinians, saying the deaths in particular of children was a “sign that they don’t want to build the future but want to destroy it.”

Francis prayed for peace, calm and international help to open a path of dialogue during his Sunday blessing, delivered from his studio window overlooking St. Peter’s Square.

The pope said: “I ask myself: this hatred and vendetta, what will it bring? Do we truly think that we can build peace by destroying the other?”

In unusually pointed comments, Francis added: “In the name of God, who created all human beings equal in rights, duties and dignity and are called to live as brothers, I appeal for calm” and an end to the violence.

Israeli airstrikes have been pounding Gaza City for days as heavy fighting has broken out between Israel and the territory’s militant Hamas rulers. The Gaza Health Ministry said 10 women and eight children were among the 26 people killed in Sunday’s airstrikes, with another 50 people wounded in the attack. – Associated Press