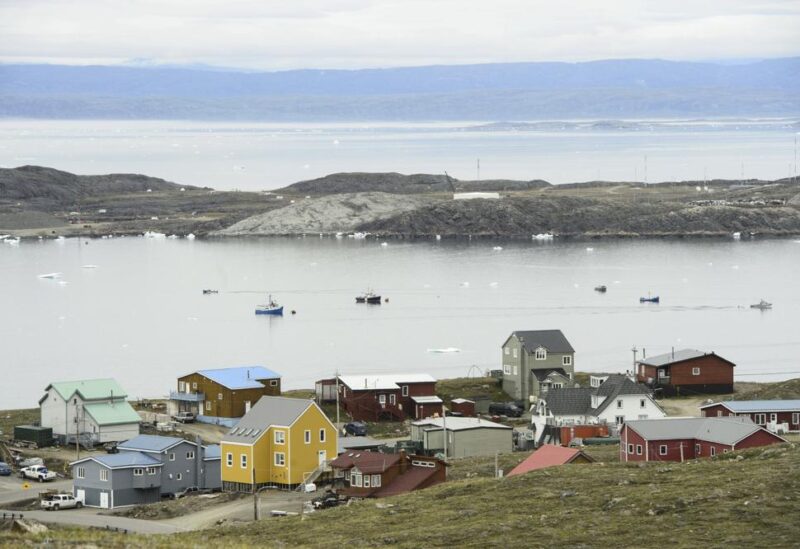 FILE - Small boats make their way through the Frobisher Bay inlet in Iqaluit, Nunavut, Canada on Friday, Aug. 2, 2019. In his extensive papal travels, Pope Francis has never journeyed further north than Iqaluit, the capital city of the Inuit-governed territory of Nunavut in northern Canada. On Friday, July 28, 2022, it will be the third and final stop of the pope's six-day Canadian visit, focused on apologies for abuses of Indigenous youths at Catholic-run boarding schools.(Sean Kilpatrick/The Canadian Press via AP, File)

Pope Francis has traveled widely as a pope, but he has never gone further north than Iqaluit, the capital of the Inuit-run province of Nunavut. It will be his sole remaining destination on Friday during his melancholy six-day trip to Canada.

It is a unique place with 7,500 residents, no traffic lights, and no access to the outside world by road or train. At least five different continents are represented among the parishioners of the area’s sole Catholic church; more than 100 of them regularly fill the pews on Sundays.

Iqaluit has welcomed world leaders before. Queen Elizabeth, for example, visited for about two and a half hours in 2002, three years after Nunavut was carved out of the eastern portion of the Northwest Territories to become a territory of its own.

The pope’s similarly brief stopover, in contrast, is not intended to be celebratory. He’ll be finishing up a Canadian visit focused on in-person apologies for the abuse and disrespect inflicted on many thousands of Indigenous Canadians – including Inuit youths — who attended Catholic-run boarding schools from the late 1800s to the 1970s.

Given the visit’s purpose, there are mixed feelings about it in Iqaluit, among Inuit leaders and also on the part of the Rev. Daniel Perreault, who oversees the parish of Our Lady of the Assumption Roman Catholic Church.

He said only a handful of his parishioners are Inuit. Most of the others hail from Africa, South America, Asia and other faraway places, have no links to the past problems of the boarding schools and would like to welcome Pope Francis joyously on Friday, Perreault said.

But the region’s Inuit organizations want the visit to be focused on their own community, said the priest. “They do not want it being an occasion of a Catholic feast.”

Iqaluit’s deputy mayor, Solomon Awa, said the Inuit community – which comprises more than half of the city’s population – abounds with swirling emotions. There is gratitude that an apology is forthcoming, and frustration that it took so long to come about.

“It will be very exciting for the people,” Awa said. “I hope that this will get us moving forward to lift ourselves as Inuit, to the point where we say, ‘Yes, we had many downsides in the past but we must move on.’”

Unlike two of his brothers, Awa was spared from attending a boarding school – his father insisted on keeping him at home as a helping hand.

“There are people still with broken hearts who went to residential schools… some of them still hold grudges with what happened,” Awa said. “They are happy that the pope is coming, finally, to say sorry for what happened.”

Iqaluit is by far the largest municipality in Nunavut, a vast territory straddling the Arctic Circle. It is roughly the size of Alaska and California combined, with a mostly Inuit population of about 40,000.

For much of the year, the weather can be severe. In February 2010, Iqaluit hosted a meeting of finance ministers and central bank governors from the Group of Seven nations; several of the dignitaries went dog-sledding in sub-zero temperatures.

Pope Francis, however, is expected to encounter cloudy skies and mild temperatures – about 57 F or 14 C.

“My gosh, he picked the softest kind of a moment to go,” teased David Phillips, senior climatologist for Environment Canada. “Until he feels what it’s like in February, it’s no badge of courage.”

The mild forecast reflects some serious concerns about the far-north climate. According to Canadian government data, average temperatures in Nunavut have increased far more sharply than in Canada as whole over recent decades.

Francis, in a speech in Quebec City on Wednesday, cited climate change as among “the great challenges of our day.” He is expected to pose for a photo in Iqaluit related to nature and climate change, but the issue is not the focus of this particular visit.

“Climate change is obviously something that is very important to us, but I really hope the attention doesn’t get away from the students who are eagerly awaiting the apology,” said Nunavut’s premier, P.J. Akeeagok.

Akeeagok is pleased and grateful that Iqaluit was chosen as one of the three main stops on the pope’s itinerary.

“When people from around the world think of the north, they often think it’s vast, white and barren, when it’s totally opposite,” he told The Associated Press. “We have so much life, in terms of the resiliency of the people… We have incredible opportunities both culturally and economically.”

Along with opportunities, Iqaluit has its share of problems. Last fall, government officials declared a state of emergency after water in the capital was deemed undrinkable and potentially tainted with petroleum. They issued a do-not-consume order, and potable water was flown in by plane.

In May, the city issued an advisory warning that some local youths were throwing rocks at taxis – the main source of public transportation in Iqaluit.

As for the papal visit, community preparations have been low-key. The city says the main street will be closed to regular traffic for five hours on Friday, and in the run-up to the visit volunteers were invited to join in a clean-up of the downtown area.

Perreault, the Catholic priest, said his parishioners have been pitching in, offering to provide food and lodging to priests and other Catholic personnel traveling to Iqaluit from afar for the pope’s visit.

“Life is not always exciting here,” Perreault said. “But people here are happy and enjoy being in a community, sharing and praying together. It’s a very nice, joyful community.”