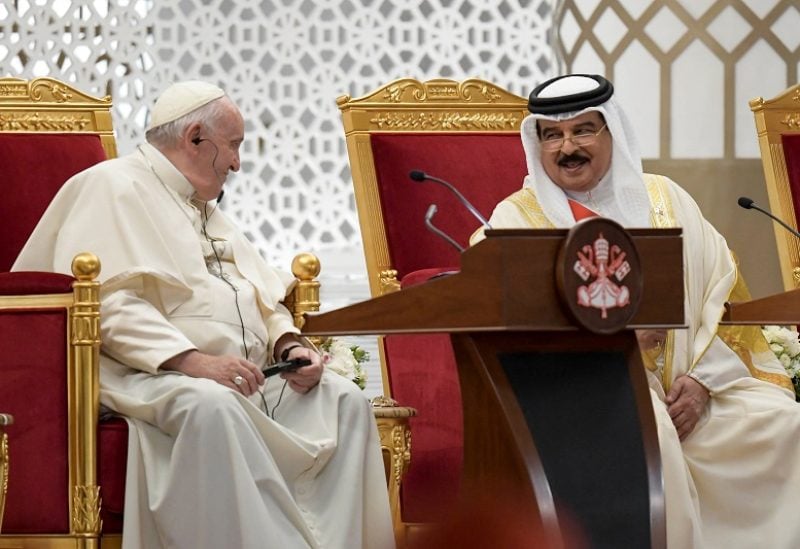 Pope Francis attends the welcome ceremony during his visit to Bahrain November 3, 2022. Divisione Produzione Fotografica/Vatican Media/­Handout via REUTERS ATTENTION EDITORS - THIS IMAGE WAS PROVIDED BY A THIRD PARTY.

Pope Francis called on Bahraini authorities to repeal the death penalty, addressing the topic of human rights during his visit to Bahrain on Thursday.

The pope stood next to Bahraini King Hamad bin Isa Al Khalifa, who welcomed him at the airport when he arrived for his four-day trip. The pontiff is due to attend an interfaith forum discussing dialogue and coexistence.

In statements made from the royal palace, Francis called for granting religious minorities in the country complete religious freedom and ending all forms of discrimination and human rights violations.

Francis urged Bahrain to guarantee “safe and dignified” working conditions for its migrant workers, the AP news agency quoted him as saying. Migrants in Bahrain make up the majority of its some 80,000 Catholic minority, in a population of around 1.5 million.

Like in many Gulf countries, living conditions for migrants are often criticized for abuses and human rights violations in Bahrain.
“Much labor is in fact dehumanising,” the French AFP news agency quoted the pope as saying. “This does not only entail a grave risk of social instability, but constitutes a threat to human dignity.”

Bahrain prides itself on being the most tolerant towards Christians in the Gulf region. It has two Catholic churches, one of which is the oldest modern church in the region. Catholics in Bahrain are allowed to practice openly, unlike in neighboring Saudi Arabia.

Shiites were at the heart of a 2011 uprising, which was quashed by the ruling family, aided by the Sunni rulers of Saudi Arabia and the United Arab Emirates. Authorities have since imprisoned thousands of activists and journalists.
Human rights groups and relatives of Shiite activists who were sentenced to death following the uprising had lobbied for the pope to address the death penalty during top-level meetings with officials.

The London-based Bahrain Institute for Rights and Democracy was among the loudest campaigners, urging the pope to address violations including the incarceration of pro-democracy activists.

Bahraini authorities have long rejected accusations of human rights abuses. They maintain all those imprisoned were prosecuted in accordance with international law. A government spokesperson told Reuters news agency, “No individual in the kingdom is arrested or in custody because of their beliefs.”

Pope Francis’ other regional visits
This is considered Pope Francis’ second visit to the Arab Gulf region. It is also the first visit by a Catholic pope to Bahrain.

In 2019, Francis visited the neighboring UAE. During the landmark visit, he signed a document promoting Muslim-Catholic fraternity.

The Bahrain trip will also see Francis attending the country’s interfaith forum and meeting the Muslim Council of Elders.
“The pope is moving forward with a certain logic to open new paths to the different realities of the Muslim world,” said Bishop Paul Hinder, the Vatican’s apostolic vicar for Southern Arabia.

The 85-year-old pope arrived in a wheelchair, due to knee pain he has been suffering from since tearing a ligament early this year.