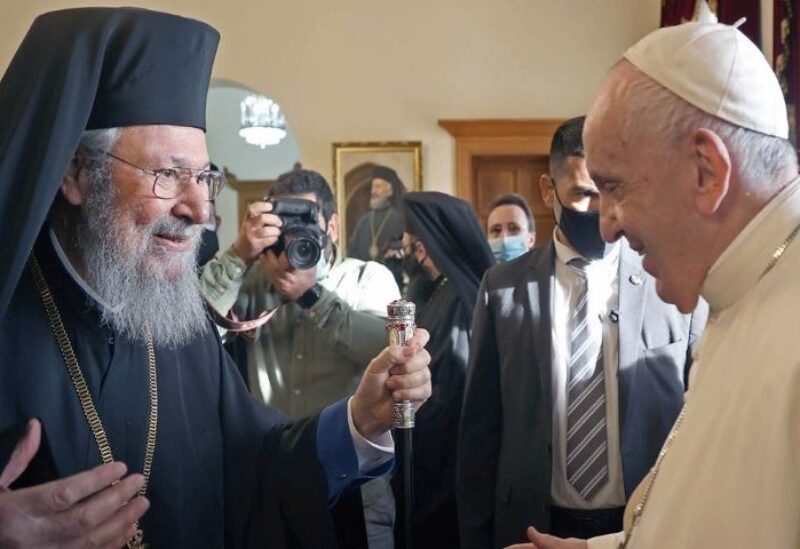 During an outdoor Mass in Cyprus on Friday, Pope Francis appealed for healing in the presence of a massive Turkish Cypriot flag on the other side of a line that has split the island for over half a century.

Francis began his first full day in Cyprus with a meeting with leaders of the Orthodox Church, the island’s largest Christian population. Francis highlighted his goal for ultimate unification between the Eastern and Western branches of Christianity, which had been divided since 1054.

The island has only 38,000 Catholics, accounting for approximately 4.7 percent of the population, and the Mass at the stadium was the highlight of the pope’s two-day visit for many.

Many of the 10,000 worshipers were Filipinos employed in Cyprus, primarily as housekeepers. The Philippines is Asia’s most populous Catholic country.

The pope centered his sermon on the themes of reconciliation and shared grief, which resonated with all Cypriots on an island that has been divided since a Turkish invasion started by a Greek-inspired revolution in 1974.

“Healing occurs when we bear our grief together, face our difficulties together, listen and communicate to one another,” Francis explained.

Numerous mediation attempts on Cyprus have failed, and the peace process came to a halt in 2017 when discussions broke down. Tens of thousands of Greek and Turkish Cypriots have been forced to flee their homes.

The massive Turkish Cypriot flag, which is painted into the slope and illuminated at night, serves as a continual reminder of divide.

Francis is exclusively visiting the island’s south, which is governed by the internationally recognized Cypriot government. Only Ankara recognizes a Turkish Cypriot breakaway state in northern Cyprus.

Shortly after the pope arrived on Thursday, the head of the self-proclaimed Turkish Republic of Northern Cyprus urged Francis to visit his side of the island as well, “with my most heartfelt sympathies.”

“I hope and anticipate Pope Francis will respond positively to our call and to treat all believers equally, as he has frequently indicated,” Ersin Tatar said in a statement.

In the aftermath of the battle, many Christian houses of worship were converted to mosques, precious icons and relics were transported overseas, and place names were altered.

“They not only imitated the bloodthirsty Attila, but they excelled him,” Chrysostomos warned Francis, alluding to a fifth-century Hun monarch and Christian foe.

“In this holy and fair battle,” Chrysostomos stated, “we would need your active support.”

In an address on Thursday, Pope Francis urged for the return of precious artefacts to their rightful owners.

The Vatican’s own relations with primarily Muslim Turkey, which the pope visited in 2014, have been strained at times.

Last year, the Pope expressed his great sadness over Turkey’s plan to convert Istanbul’s Hagia Sophia museum, which was originally a Christian cathedral, into a mosque.

The pope enraged Turkey in 2015 when he declared that the massacre of up to 1.5 million Armenians during World War One was “the first genocide of the twentieth century.”

In response to the claims of genocide, Turkey summoned its ambassador to the Vatican.