Pope Francis: ” The Church in Iraq is alive.” 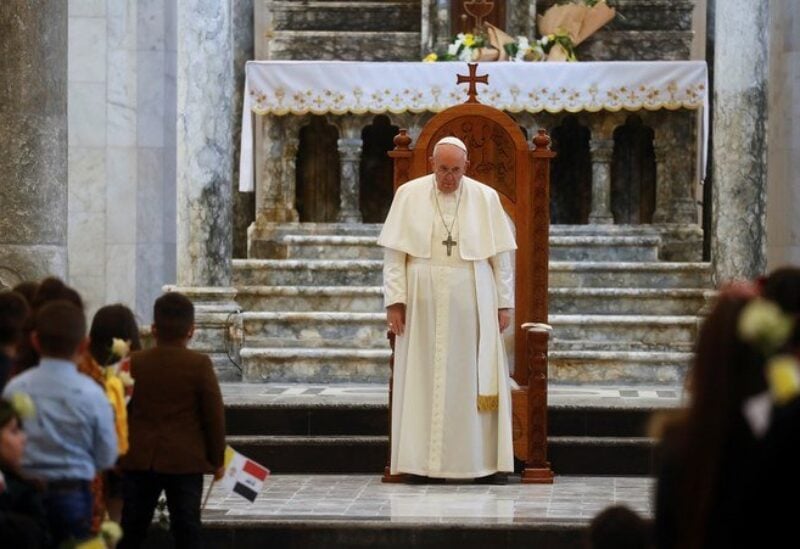 The road to a full recovery may still be long, but I ask you, please, not to grow discouraged’ Pope Francis said on Sunday at a church in the Iraqi town of Qaraqosh, where Christians lived before Daesh occupied it from 2014 to 2016, forcing thousands to flee. Terrorism and death “will never have the last word, Even amid the ravages of terrorism and war, we can see, with the eyes of faith, the triumph of life over death,” he added on the third day of his historic visit to Iraq.

He called the Angelus Sunday midday prayer at the Syriac Catholic Al-Tahira Church, which was vandalized and burnt by Daesh and turned into a shooting range. The church has since been completely restored.

Pope Francis appeared very moved by the testimonies of Christians from a region that had been devastated by Daesh.

He told Christians in Iraq: “You are not alone. The entire Church is close to you, with prayers and concrete charity. And in this region, so many people opened their doors to you in time of need.”

He added: “The road to a full recovery may still be long, but I ask you, please, not to grow discouraged. What is needed is the ability to forgive, but also the courage not to give up.”

The pope then flew by helicopter to the city of Mosul, where he prayed for the “victims of all wars.”

In Erbil, capital of the autonomous Kurdish region — which was a safe haven for thousands of Christians fleeing Daesh — he held the largest Mass of his visit to Iraq.

He was greeted there by 10,000 cheering faithful gathered in Franso Hariri Stadium, which was at one-third capacity as a measure against the spread of COVID-19.

In the sermon, Pope Francis praised the Catholic Church in Iraq for “spreading Christ’s mercy and forgiveness, particularly toward those in greatest need.”

He said: “Even amid great poverty and difficulty, many of you have generously offered concrete help and solidarity to the poor and suffering. That is one of the reasons that led me to come as a pilgrim in your midst, to thank you.”

He added: “Today, I can see first-hand that the Church in Iraq is alive, that Christ is alive and at work in this, his holy and faithful people.”

Pope Francis then flew to Baghdad, from where he is due to return to the Vatican on Monday morning.