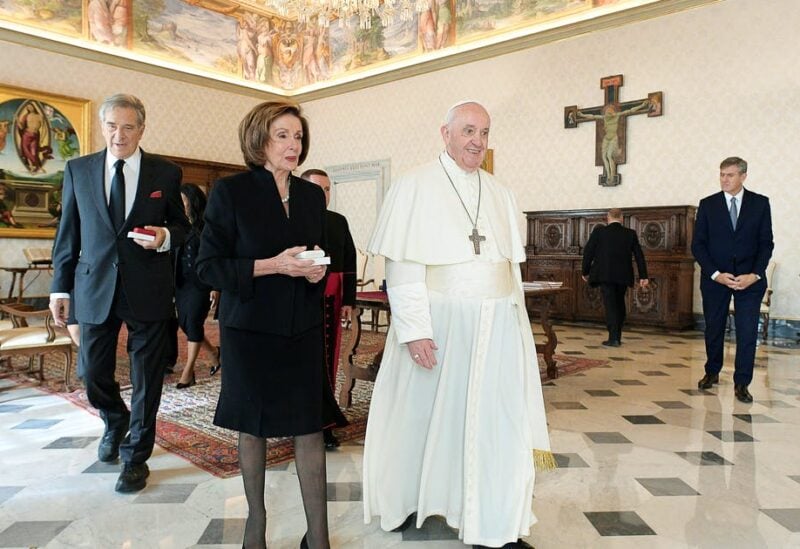 On Saturday, Pope Francis met with U.S. House Speaker Nancy Pelosi, a Catholic who has been chastised by several American bishops for her support for abortion rights.

Their encounter took place a few weeks before US President Joe Biden is scheduled to meet with Pope Francis when in Rome for discussions between leaders of the Group of 20 major economies.

Biden, the second Catholic president of the United States, has stated that he is personally opposed to abortion but that he cannot impose his views as a politician. Pelosi, who is the mother of five children, has stated that she believes in a woman’s freedom to choose.

Biden’s administration and Pelosi have urged judges to block a new Texas law which bars abortions from six weeks, saying it is unconstitutional. The ban was temporarily reinstated on Friday by a conservative-leaning appeals court.

The Catholic Church teaches that human life begins at the moment of conception and Biden and Pelosi have been criticized by conservative Catholic media and U.S. conservative bishops, some of whom say neither should be allowed to receive communion.

Last month the pope, asked about the U.S. communion debate, told reporters abortion is “murder”, even soon after conception, but appeared to criticize U.S. Catholic bishops for dealing with the issue in a political rather than pastoral way.

“Communion is not a prize for the perfect … communion is a gift, the presence of Jesus and his Church,” the pope said.

In June, a divided conference of U.S. Roman Catholic bishops voted to draft a statement on communion that some bishops say should specifically admonish Catholic politicians, including Biden. They take up the issue again next month.

The Vatican announced Pelosi’s audience with the pope in its daily bulletin but gave no details.

After Pelosi met former Pope Benedict in 2009, the Vatican said he had told her that legislators and other public figures should help create “a just system of laws capable of protecting human life at all stages of its development”.

The archbishop in Pelosi’s home city of San Francisco, Salvatore Cordileone, has said public figures who support abortion should be denied communion in his archdiocese and has urged Catholics to pray for Pelosi’s “conversion of heart”.

Cardinal Wilton Gregory, the archbishop of Washington, D.C., has not tried to stop Biden, a regular church-goer, from receiving communion.

Biden’s meeting with the pope will be the first since his election although they have met several times before, including when he was vice-president to Barack Obama.

Pelosi is in Rome for a Parliamentary Speakers’ Summit ahead of the G20 as well a meeting of parliamentary leaders before of the U.N. Climate Change Summit (COP20) next month in Glasgow.

Francis told the parliamentarians separately on Saturday they had a decisive role to play in protecting the environment.

The Vatican announced on Friday that the pope would not be going to Glasgow but that its delegation would be headed by Cardinal Pietro Parolin, the secretary of state.