Just like any Uk citizen, Queen Elizabeth knew about the “tell-all’ interview , Prince Harry and Meghan are to give to Oprah Winfrey

It is usual for members of the Royal Family to run potential TV interviews past the Queen.

But Harry not only kept the deal secret, sources question whether he instigated the discussions with the Queen over the Sussexes’ ‘divorce deal’ in order for it to be settled before the interview, which was recorded last Tuesday.

Harry and Meghan brought forward the announcement of their ‘wide-ranging interview, covering everything from stepping into life as a Royal, marriage, motherhood [and] philanthropic work’ after ITV were accidentally tipped off about it.

The Queen decided to strip Harry and Meghan of their royal patronages and honorary military titles . She sent  a letter explaining the decision .

In it, she underlined that there could be no ‘half-in, half-out’ role for the Duke and Duchess, including the specific words that ‘in stepping away from the work of the Royal Family it is not possible to continue with the responsibilities and duties that come with a life of public service’.

That sentence, which was also included in the official Buckingham Palace statement on Friday, is said to have infuriated Harry and Meghan. In their stinging reply, they insisted they would still live ‘a life of service’ away from the Royal Family, adding: ‘Service is universal.’

The interview with Oprah Winfrey will ‘make or break’ the fortunes of the Duke and Duchess of Sussex in the US, experts predict.

The 90-minute programme, which will air immediately after CBS’s flagship 60 Minutes show on March 7, is the couple’s chance ‘to woo and win over Americans’. A producer who has worked with Ms Winfrey in the past said: ‘This is make or break for them. 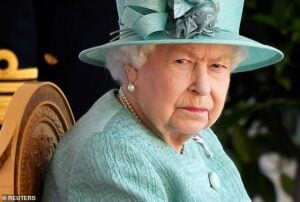 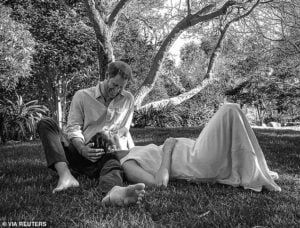 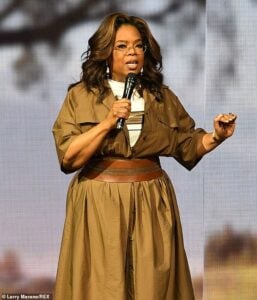