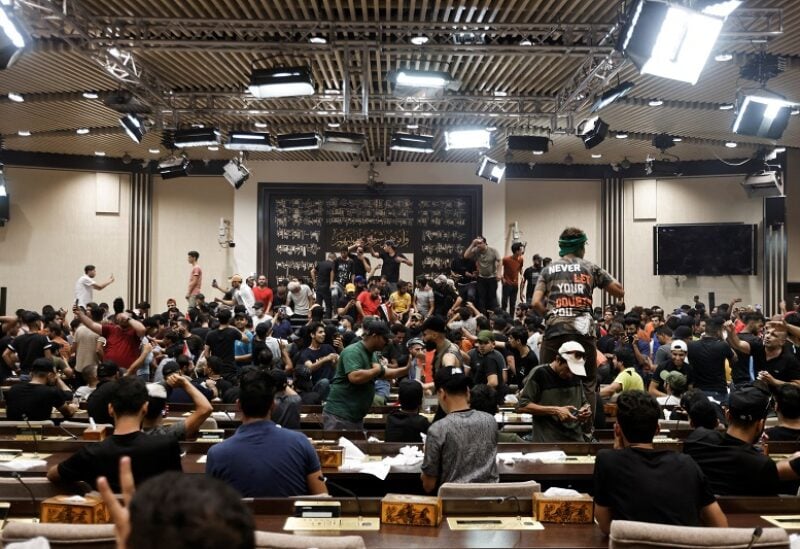 Protesting against a rival bloc’s nomination for prime minister, supporters of powerful Iraqi cleric Moqtada Sadr on Wednesday stormed parliament after penetrating the capital’s high-security government Green Zone.
Protesters “stormed the parliament” after initially being stopped by police firing a barrage of tear gas, a security source told AFP on condition of anonymity.
State agency INA said on messaging app Telegram that “protesters have entered the parliament building.”
The heavily fortified Green Zone is home to government buildings and diplomatic missions.
Prime Minister Mustafa Al-Kadhemi called on the protesters to “immediately withdraw” from the Green Zone.
He warned in a statement that security forces would see to “the protection of state institutions and foreign missions, and prevent any harm to security and order.”
An AFP correspondent in the Green Zone had earlier seen protesters carrying a fellow demonstrator who had been hurt.
Sadr’s bloc won 73 seats in Iraq’s October 2021 election, making it the largest faction in the 329-seat parliament.
But since the vote, talks to form a new government have stalled.
The oil-rich country remains mired in a political and a socioeconomic crisis, despite elevated global oil prices.
The protesters oppose the candidacy of Mohammed Al-Sudani, a former minister and ex-provincial governor, who is the pro-Iran Coordination Framework’s pick for premier.