Protest in Netherlands against coronavirus measures 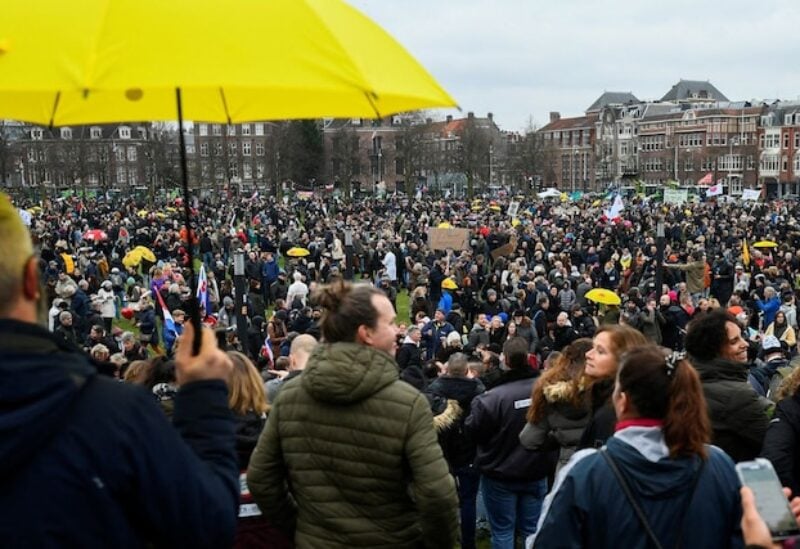 Thousands of protesters packed Amsterdam’s streets on Sunday in opposition to the government-imposed COVID-19 measures and vaccination campaign as virus infections hit a new record.

Authorities were granted stop and search powers at several locations across the city and scores of riot police vans patrolled neighbourhoods where the demonstrators marched with banners and yellow umbrellas.

Regular anti-coronavirus protests are held across the country and Sunday’s large gathering was joined by farmers who drove to the capital and parked tractors along the central Museum Square.

The Netherlands had one of Europe’s toughest lockdowns for a month through the end-of-year holidays.

Infections reached another record high above 36,000 on Sunday, data published by the Netherlands Institute for Health (RIVM) showed. The Netherlands has recorded more than 3.5 million infections and 21,000 deaths since the start of the pandemic.

Rutte’s government ordered the lockdown in mid-December as a wave of the Delta variant forced the health system to cancel all but the most urgent care and it appeared rising Omicron cases would overwhelm it.

Non-essential stores, hairdressers, beauty salons and other service providers were allowed to reopen on Saturday under strict conditions.

Bars, restaurants and cultural venues have been instructed to remain closed until at least Jan. 25 due to uncertainty about how the Omicron wave will impact hospital capacity.