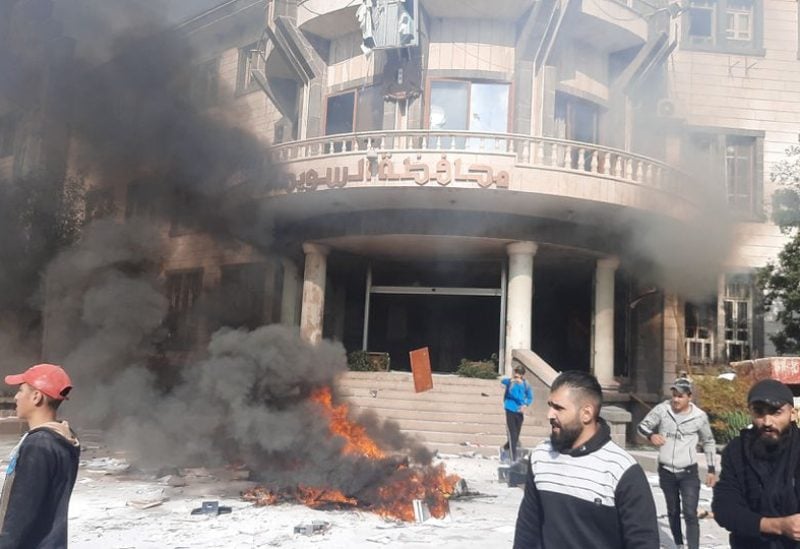 Smoke rises near a building as people take part in a protest in Sweida, Syria, December 4, 2022, in this picture obtained by Reuters. Suwayda 24/via REUTERS

In the southern city of Sweida on Sunday, dozens of protesters enraged by the deteriorating economic conditions in Syria attacked and trashed the governor’s office before squaring off with police, according to the authorities and witnesses.

They claimed that earlier, in the midst of rising prices and hard times, more than 200 people had gathered outside the building in the center of the Druze-dominated city and were screaming slogans demanding the removal of Syrian President Bashar Assad.

The Ministry of Interior said they had also tried to seize the city’s police headquarters, and that one policeman was killed in the ensuing clashes.

“We will pursue all the outlaws and take all legal measures against anyone who dares to undermine the security and stability of the province,” the government statement said.

Three witnesses told Reuters the governor was not in the building which was vacated before protesters stormed and ransacked offices.

A source in the city hospital said one civilian who was being treated had died from gunshot wounds while another was still in hospital after being shot.

Sweida province has been spared the violence seen in other parts of Syria since the start of the over-decade long conflict that began after pro-democracy protests erupted against Assad’s family rule were violently crushed by security forces.

The tiny Druze sect, whose religion has Islamic roots, has long resisted being involved in the crisis in Syria, which primarily involves Sunni rebels opposing Assad’s regime.

Many prominent Druze religious figures and members of the community have opposed approving military service.

After a catastrophic battle that claimed hundreds of thousands of lives and uprooted millions, Syria is experiencing a severe economic crisis where the majority of the population struggles to afford food and essentials.

Witnesses in Sweida told Reuters that after entering the structure, the protesters tore down