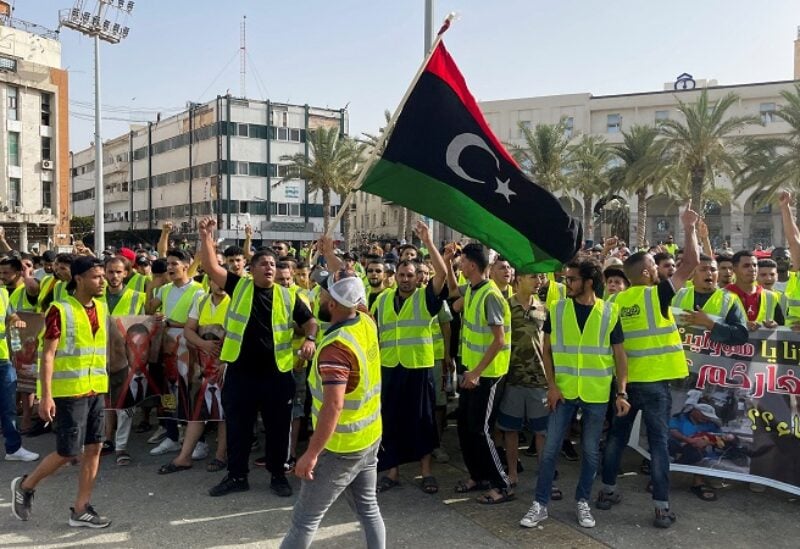 Protesters stormed on Friday the Libyan parliament building in the eastern city of Tobruk and staged the biggest demonstration for years in the capital Tripoli, in the west.
The Tobruk protesters, accusing the parliament of treason and stealing public money, some eight years after its election, broke into the building and set fire to parts of it as armed forces there withdrew.
In videos posted online and confirmed by city residents, the demonstrators shouted and cheered as flames licked up the side of the building.
With political factions squabbling over control of government after failing to hold a scheduled election last year, Libya has been thrust back towards territorial division and civil war as state services gradually collapse.
Protests over chronic power cuts brought demonstrators onto the streets of several cities, braving the wrath of armed factions to voice their anger at failures that have made life intolerable during the sweltering summer months.
In Tripoli’s Martyrs’ Square, several hundred people gathered to shout slogans demanding electricity, criticizing armed factions and politicians and demanding elections in the capital’s biggest protests against the ruling elite for years.
Later on Friday, dozens of protesters stood by the government headquarters building, chanting “we want electricity, we want electricity”.
Other protests of dozens of demonstrators also took place in each of Benghazi, al-Baydha and Misrata and some smaller towns, showing how anger at the situation extends across the frontlines of power between the country’s rival forces.
“We are fed up, we are fed up! The nation wants to topple governments! We want electricity!” shouted protesters in Tripoli, along with chants demanding elections.
They also chanted slogans against the armed factions that exert control across swathes of Libya. “No to militias. We want police and army” they chanted.
Armed forces with police and military affiliations were visible around Martyrs’ Square. During protests two years ago, shots were fired at demonstrators.
“I’m here today to protest against all the officials who brought this country to hell,” said Omar Derbal, 23, a science student.
“We’re an oil producing country that has power cuts every day. It means the country is run by corrupt individuals,” he added.
In the town of al-Quba in eastern Libya, hometown of parliament speaker Aguila Saleh, dozens of residents demanded the fall of all governments and political bodies because of the low standards of living
Libya’s electricity sector has been undermined by years of warfare and political chaos, stopping investment, preventing maintenance work and sometimes damaging infrastructure.
The interim Government of National Unity (GNU) installed last year pledged to resolve the problems, but although it issued contracts for work on several power plants, none has come into operation and political wrangling has prevented further works.
Meanwhile, with the eastern-based parliament appointing Fathi Bashagha to head a new government even though the interim GNU prime minister Abdulhamid al-Dbeibah refuses to hand over power, the political standoff threatens to make things worse.
Eastern-based factions have blockaded oil facilities, reducing fuel supply to major power plants, causing more blackouts
In Tripoli, protesters waved placards on which the faces of Dbeibah, Bashagha, Saleh, another legislative leader and the UN representative were crossed out with big red marks.