Public gets chance to view queen’s coffin in Edinburgh 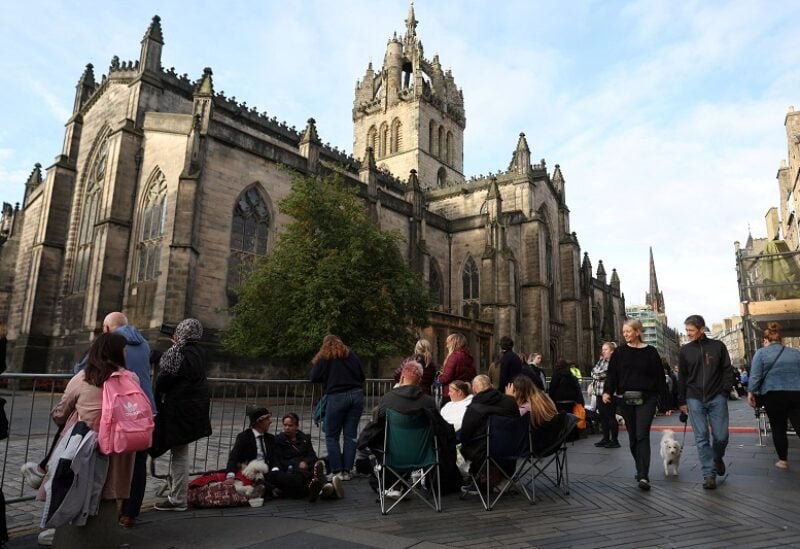 People wait outside St Giles' Cathedral for the procession of the coffin of Britain's Queen Elizabeth, following her death, in Edinburgh, Scotland, Britain September 12, 2022. REUTERS/Carl Recine

As King Charles III will start the day speaking to lawmakers at Parliament in London before flying to Scotland, the first members of the public will have the chance to pay respects to Queen Elizabeth II on Monday when the monarch’s coffin lies at rest at St. Giles’ Cathedral in Edinburgh.
The start of the working week is another day steeped in the historic pageantry and pomp that follows the death of a British sovereign.
On Sunday, thousands of people lined streets and roadsides as the oak coffin was borne from the late queen’s beloved Balmoral Castle summer retreat, where she died on Thursday, to Edinburgh.
The new king, accompanied by his wife, Camilla, the Queen Consort, will walk behind his mother’s coffin as it is slowly transported from Holyroodhouse to St. Giles’ Cathedral, where the crown of Scotland will be placed on the coffin ahead of a service of prayer and reflection on the life and 70-year reign of the widely cherished monarch.
The queen’s coffin will lie at the cathedral for 24 hours, giving members of the public a chance to file past and pay their respects. On Tuesday, it will be flown to London where the coffin will lie in state at the Houses of Parliament Palace from Wednesday afternoon until the morning of the funeral on Sept. 19.
Authorities already have issued rules and guidelines for people wanting to pay their respects in London, with a long queue expected.
After visiting Scotland, Charles embarks on a tour of the other nations that make up the United Kingdom — he visits the Northern Ireland capital, Belfast, on Tuesday and Wales on Friday.