Putin attends Orthodox Christmas service by himself in Kremlin 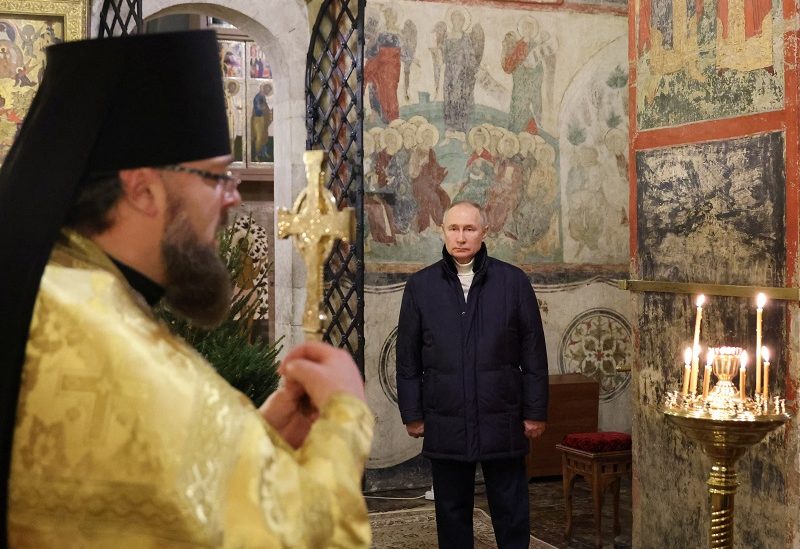 Russian President Vladimir Putin attends the Orthodox Christmas service at the Kremlin in Moscow, Russia January 7, 2023. Sputnik/Mikhail Klimentyev/Kremlin via REUTERS ATTENTION EDITORS - THIS IMAGE WAS PROVIDED BY A THIRD PARTY.

Russian President Vladimir Putin on Saturday attended an Orthodox Church Christmas service by himself inside a Kremlin cathedral rather than joining other worshippers in a public celebration.

Russia’s RIA news agency said it was the first time in years that Putin had marked Christmas in Moscow rather than in the region around the capital.

State television showed two live clips of Putin inside the gilded Cathedral of the Annunciation as Orthodox priests conducted the midnight service, known as the Divine Liturgy.

Putin, wearing a blue jacket and a high-necked white sweater, was the sole worshipper and crossed himself several times before television coverage cut away to a public service in Moscow’s Christ the Saviour Cathedral.

Putin, who celebrated Easter last year in the cathedral with thousands of others, also attended Christmas by himself last year in his official Novo-Ogaryovo residence outside Moscow. In 2021, he took part in a public Divine Liturgy in Novgorod. — Reuters