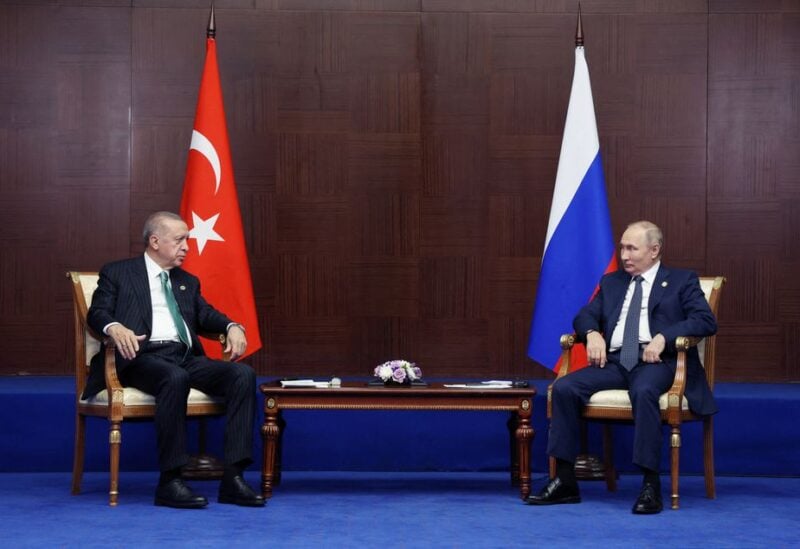 Russia's President Vladimir Putin and Turkey's President Tayyip Erdogan meet on the sidelines of the 6th summit of the Conference on Interaction and Confidence-building Measures in Asia (CICA), in Astana, Kazakhstan October 13, 2022 - REUTERS

On Thursday, Russian President Vladimir Putin proposed to his Turkish counterpart Tayyip Erdogan that Moscow export more gas through Turkey and convert it into a new supply “hub,” in an effort to maintain Russia’s energy clout over Europe.

Putin stated at a conference in Kazakhstan that Turkey provided the most dependable route for delivering gas to the European Union, and that the proposed platform would allow pricing to be determined without regard for politics.

Russia is looking to redirect supplies away from the Nord Stream Baltic gas pipelines, damaged in explosions last month that are still under investigation. Russia blamed the West, without providing evidence, and rejected what it called “stupid” assertions that it had sabotaged the pipelines itself.

Putin told Erdogan the hub would be “a platform not only for supplies, but also for determining the price, because this is a very important issue”.

Erdogan did not respond in the televised portion of their meeting, but Kremlin spokesman Dmitry Peskov was quoted by the Russian news agency RIA as saying both men had ordered a rapid and detailed examination of the idea.

Russia supplied about 40% of Europe’s gas before its Feb. 24 invasion of Ukraine but had cut flows sharply even before the explosions, blaming technical problems that it said were the result of Western sanctions.