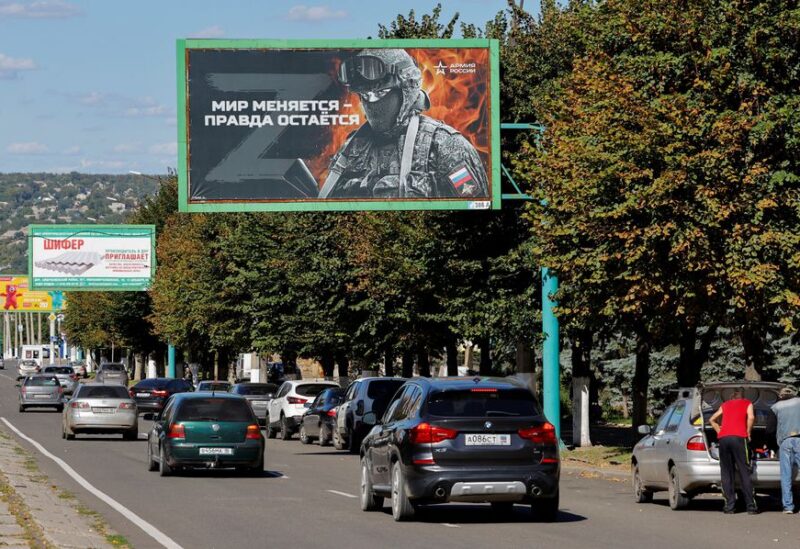 Vehicles drive past advertising boards, including panels displaying pro-Russian slogans, in a street in the course of Russia-Ukraine conflict in Luhansk, Ukraine September 20, 2022. One of the boards reads: "World changes - truth stays. Army of Russia". REUTERS/Alexander Ermochenko

Russian President Vladimir Putin declared a limited military mobilization on Wednesday, in response to a Ukrainian counteroffensive that has gained some of the captured territory.

Putin claimed that the West wants to destroy Russia and does not desire peace in Ukraine in a televised address, stating that the partial mobilization of its 2 million-strong military reserves was to defend Russia and its territories.

“To protect homeland, its sovereignty (…), I consider it necessary to support the decision of the General Staff on partial mobilization,” he said.

Putin restated his aim was to “liberate” east Ukraine’s Donbas industrial heartland region and that most people in the region did not want to return to what he called the “yoke” of Ukraine.

Putin said the West had engaged in nuclear blackmail, but Russia had “lots of weapons to reply” and that he was not bluffing.

Russia already considers Luhansk and Donetsk, which together make up the Donbas region Moscow partially occupied in 2014, to be independent states. Ukraine and the West consider all parts of Ukraine held by Russian forces to be illegally occupied.

Russia now holds about 60% of Donetsk and had captured nearly all of Luhansk by July after slow advances during months of intense fighting.

Those gains are now under threat after Russian forces were driven from neighbouring Kharkiv province this month, losing control of their main supply lines for much of the Donetsk and Luhansk front lines.

In an apparently coordinated move, pro-Russian figures on Tuesday announced referendums for Sept. 23-27 in Luhansk, Donetsk, Kherson and Zaporizhzhia provinces, representing around 15% of Ukrainian territory, or an area about the size of Hungary.