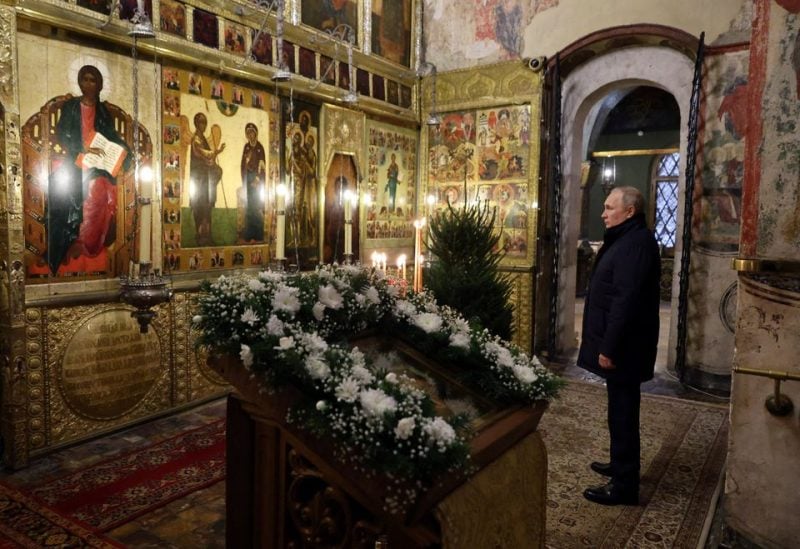 In an Orthodox Christmas speech intended to energize the populace behind his vision of a modern Russia, President Vladimir Putin commended the Russian Orthodox Church on Saturday for aiding Moscow’s military engaged in combat in Ukraine.

Putin’s statement was released by the Kremlin after he chose to attend a private Orthodox Christmas Eve service in a Kremlin cathedral rather than partake in a larger public celebration.

In his message, accompanied on the Kremlin website by an image of him standing before religious icons, Putin made it clear he saw the Russian Orthodox Church as an important stabilizing force for society at a time he has cast as a historical clash between Russia and the West over Ukraine and other issues.

“It is deeply gratifying to note the enormous constructive contribution of the Russian Orthodox Church and other Christian denominations in unifying society, preserving our historical memory, educating youth and strengthening the institution of family,” said Putin.

On Friday, Putin ordered a 36-hour ceasefire for the celebrations, but Kyiv rejected it as Moscow’s ploy to buy time and regroup and Russian and Ukrainian forces exchanged artillery fire after the announcement.

Of 260 million Orthodox Christians in the world, about 100 million are in Russia itself and some of those abroad are in unity with Moscow.

Others, however, are vehemently opposed and disagree with Moscow’s claim that its invasion of Ukraine on February 24 of last year was a necessary pre-emptive attack to protect both its own security and the safety of Russian speakers there.

Patriarch Kirill of Moscow criticized Ukraine for cracking down on the Orthodox church branch with long-standing ties to Moscow at a liturgy on Friday.