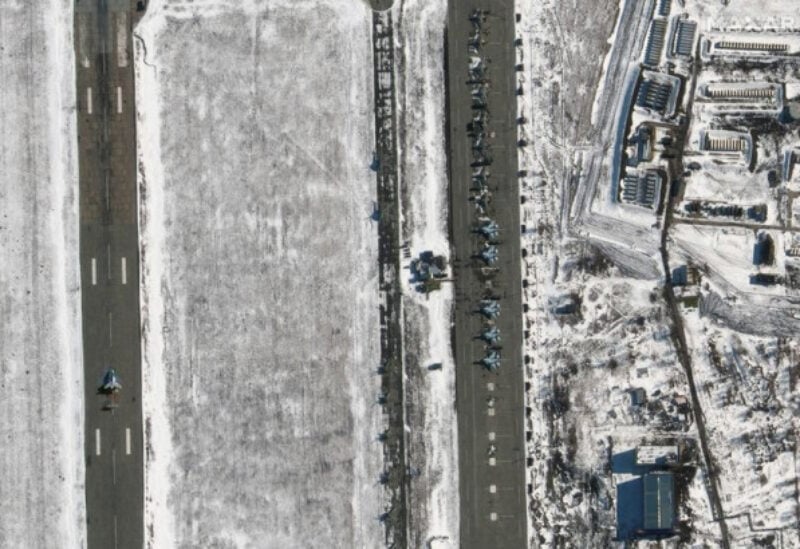 As Western leaders gathered in Munich on Saturday, Russia’s President Vladimir Putin was poised to oversee drills by strategic nuclear missile forces, raising fears that he may order soldiers massed on Ukraine’s border to invade at any time.

A day after ordering women and children to flee to Russia, Russian-backed separatist leaders in eastern Ukraine proclaimed a full military mobilization, fearing an impending onslaught by Ukrainian forces. Kiev categorically disputed the charge, while Washington said it was part of Russia’s effort to establish a pretext for an invasion of Ukraine.

A Reuters witness reported hearing multiple explosions on Saturday morning in the north of the separatist-controlled city of Donetsk in eastern Ukraine. The source was not immediately apparent. Ukraine has previously said that one of its soldiers had been killed.

Russia ordered the military buildup while demanding that NATO prevent Kyiv from ever joining the alliance, but it claims that predictions that it is going to attack Ukraine are incorrect and hazardous. It claims to be withdrawing, while Washington and its allies argue that the buildup continues in one of the greatest crises since the Cold War.

U.S. President Joe Biden, who has given regular warnings of an impending invasion, said on Friday he now believes the capital Kyiv would be targeted by Russia but that he does not think Putin is even remotely contemplating using nuclear weapons.

“We have reason to believe the Russian forces are planning to and intend to attack Ukraine in the coming week, in the coming days,” Biden told reporters at the White House.

“As of this moment, I am convinced that he has made the decision.”

Putin will oversee exercises by Russia’s nuclear forces on Saturday involving the launch of ballistic and cruise missiles, the defense ministry said. Kremlin spokesman Dmitry Peskov said the exercises were part of a regular training process and Putin was likely to take part from a “situation center”.

Analysts said it was a show of strength. “…nuclear forces exercises are sending message to US so that it leans harder on Kyiv. Doctrine of strategic tension at work,” Dmitri Trenin, director of the Carnegie Moscow Center, wrote on Twitter.

Russia has released footage to show it is withdrawing troops from the border but the United States says there has been a ramp-up to between 169,000-190,000 troops, from 100,000 at the end of January.

New helicopters and a battle group deployment of tanks, armored personnel carriers and support equipment have deployed in Russia, near the border, according to U.S.-based Maxar Technologies, which tracks developments with satellite imagery.

The Kremlin also has tens of thousands of troops staging exercises in Belarus, north of Ukraine, that are due to end on Sunday. Belarus’ leader Alexander Lukashenko said on Friday they could stay as long as needed.

Western countries fear a conflict on a scale unseen in Europe at least since the Yugoslav and Chechen wars of the 1990s, when hundreds of thousands died and millions fled and have urged Putin repeatedly to negotiate.

The Kremlin confirmed on Saturday that Putin and French President Emmanuel Macron will speak by phone on Sunday, the TASS news agency reported.

‘WEAPON IN THEIR HANDS’

In a breakaway region of East Ukraine, Denis Pushilin, head of the self-proclaimed Donetsk People’s Republic, said he had signed a decree on mobilisation and called on men “able to hold a weapon in their hands” to come to military commissariats.

Less than 7,000 people had been evacuated from Donetsk as of Saturday morning, the local emergencies ministry said. Russian news agencies said later 10,000 evacuees had arrived in Russia.

At one evacuation point at a market in Donetsk, 38-year-old Oksana Feoktisova boarded a bus with her 9-year-old son and her mother. They were accompanied by Feoktisova’s brother Yuri who stayed behind in Donetsk.

“They don’t let men on, and I wouldn’t go anyway frankly,” Yuri said. “I’m a reservist in any case. I’m an artillery man by birth… I’m loyal to my state, to my people.”

Asked about the evacuations, White House press secretary Jen Psaki said on Friday they were a “good example” of what Washington fears, that Russia was trying to create confusion on the ground.

Incidents of shelling across the line dividing government forces and separatists increased sharply this week, in what the Ukrainian government called a provocation. It strongly denied suggestions by Russia that Kyiv could launch an offensive in eastern Ukraine.

Hours after the evacuation announcement, a jeep exploded outside a rebel government building in the city of Donetsk and Russian news agencies said two explosions hit Luhansk, one of the main cities in Ukraine’s breakaway People’s Republic of Luhansk, and part of a gas pipeline in the area caught fire.

With the crisis mounting at home, Zelenskiy’s office confirmed his attendance, saying he would return to Kyiv the same day.

Harris was set to warn Russia an invasion would likely lead to an even bigger NATO footprint on its doorstep as well as huge financial costs, according to a senior U.S. administration official who spoke to reporters on the condition of anonymity.

Her message will also make clear the United States remains open to diplomacy “even at this late hour, the official said.

Russian-backed rebels seized a swathe of eastern Ukraine in 2014, the same year that Moscow annexed Ukraine’s Crimea region. Kyiv says that more than 14,000 people have since died in the conflict in the east.