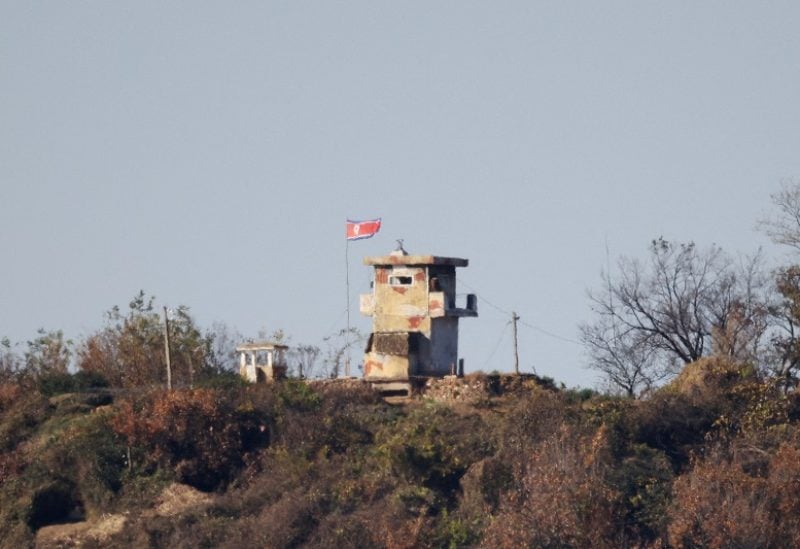 A North Korean guard post is seen in this picture taken near the demilitarized zone separating the two Koreas, in Paju, South Korea, November 4, 2022. REUTERS/Kim Hong-Ji

After launching a series of missiles this week, North Korea fired again four short-range ballistic missiles into the western sea on Saturday morning, said South Korean military, adding the missiles flew about 130 kilometers at an altitude of about 20km.
Washington, Seoul and Tokyo condemned the act, raising speculation it could be readying for the resumption of nuclear testing for the first time since 2017.
Saturday’s launch, fired between 11:31 a.m. and 11:59 a.m. KST, comes as the United States and South Korea wrapped up a six-day Vigilant Storm exercise that began on Oct. 31.
The joint military exercise involved some 240 military aircraft and two US strategic bomber B-1B, according to South Korea’s Joint Chiefs of Staff.
This is the first time the B-1B has been deployed in US-South Korean drills since 2017, which shows “the combined defense capabilities and determination of the Republic of Korea and the US to resolutely respond to any provocations from North Korea, and the will of the US to implement a strong commitment to extended deterrence,” JCS said in a statement.
Pyongyang on Friday demanded that the United States and South Korea halt “provocative” air exercises. South Korea said it scrambled warplanes in response to 180 North Korean military flights near the countries’ shared border on Friday.
On Wednesday, North Korea fired a daily record 23 missiles, with one landing off the coast of South Korea for the first time.
In recent years the UN Security Council has been split on how to deal with North Korea and in May, China and Russia vetoed a US-led push to impose more UN sanctions in response to North Korean missile launches.