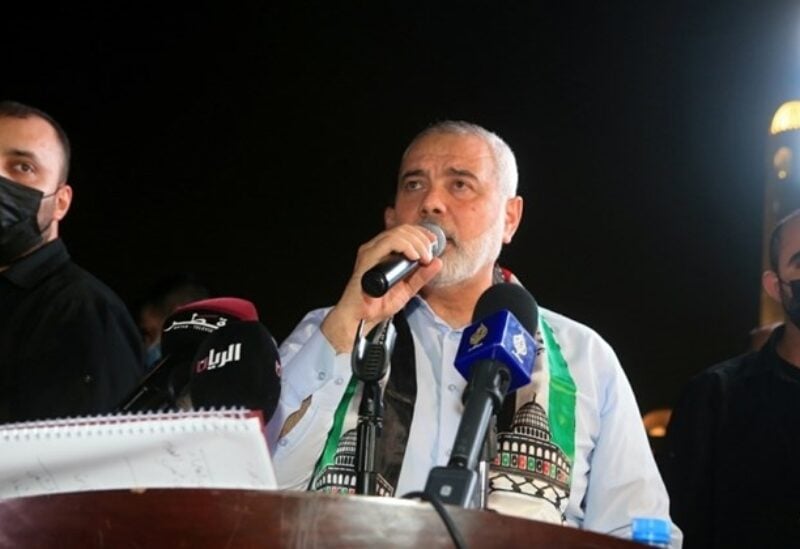 Palestinian group Hamas' top leader, Ismail Haniyeh speaks during a protest to express solidarity with the Palestinian people amid a flare-up of Israeli-Palestinian violence, in Doha, Qatar May 15, 2021. (REUTERS/Hussein Sayed)

DOHA: Qatar’s foreign minister on Saturday met with the political chief of Palestinian Islamist movement Hamas and called for an end to Israel’s bombardment of Gaza, state media said.

“The international community must act urgently to put an end to Israel’s brutal and repeated attacks against civilians in Gaza and (Jerusalem’s) Al-Aqsa mosque,” Qatar’s Sheikh Mohammed bin Abdulrahman Al-Thani said in a statement carried by the official QNA news agency.

Their meeting came amid days of Israeli air strikes on Gaza, the group’s stronghold, in response to rocket fire by Palestinian militants in the coastal strip.

The violence was sparked by clashes between Palestinian demonstrators and Israeli forces at the flashpoint Al-Aqsa mosque compound, one of the holiest sites in Islam.

Hamas issued an ultimatum for Israel to remove its forces, then started firing rockets into the Jewish state.

“We warned that the blessed Al-Aqsa mosque was a red line and we told Netanyahu: ‘don’t play with fire’,” Haniyeh, who lives in exile, told hundreds of supporters at a pro-Palestinian demonstration in Doha.

He was speaking hours after an Israeli air strike flattened a building housing international media outlets including Qatar-based Al Jazeera.

Qatar, a key Hamas backer, has used its vast natural gas riches to provide aid and loans to Israeli-blockaded Gaza as well as mediating with Israel. – AFP