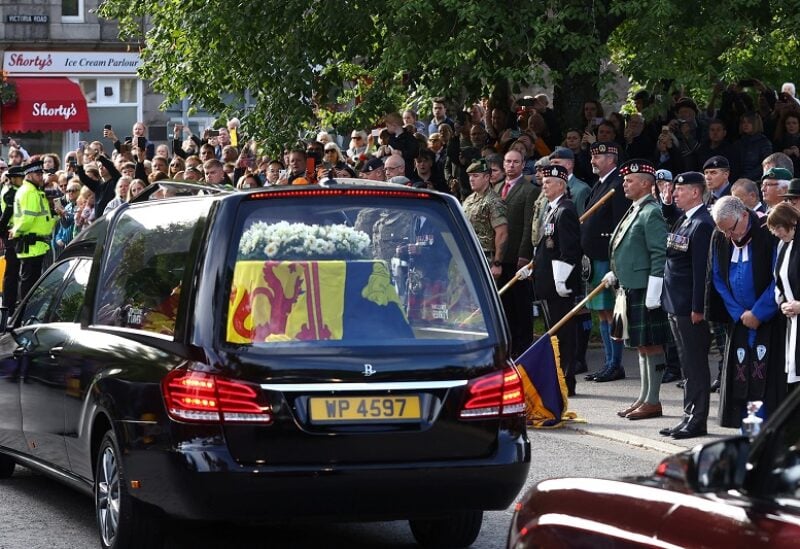 The hearse carrying the coffin of Britain's Queen Elizabeth passes through the village of Ballater, near Balmoral, Scotland, Britain, September 11, 2022. REUTERS/Hannah McKay

Beginning its last journey back to London for a state funeral, Queen Elizabeth II’s coffin left her beloved Scottish estate Balmoral Castle on Sunday as the monarch who died after 70 years on the throne.
Gamekeepers from Balmoral, the summer retreat where the queen died Thursday, carried the late sovereign’s oak coffin from the castle’s ballroom to a hearse to begin a six-hour, 280-kilometer (175-mile) journey through Scottish towns to Holyroodhouse palace in Edinburgh.
Crowds are lining parts of the route as the nation mourns its longest-reigning monarch, the only one most Britons have ever known. Early Sunday, flowers and other tributes — a small Paddington Bear toy, a hand-drawn picture of the queen — were piled up outside the gates of Balmoral.
A marmalade sandwich — Paddington Bear’s favorite snack — also lay among the floral tributes directly outside the gates of Balmoral. A message on the plastic bag read: “A marmalade sandwich for your journey ma’am.”
Sunday’s solemn drive through Scotland comes a day after the queen’s eldest son was formally proclaimed the new monarch — King Charles III — at a pomp-filled accession ceremony steeped in ancient tradition and political symbolism.
“I am deeply aware of this great inheritance and of the duties and heavy responsibilities of sovereignty, which have now passed to me,” Charles said as he took on the duties of monarch.