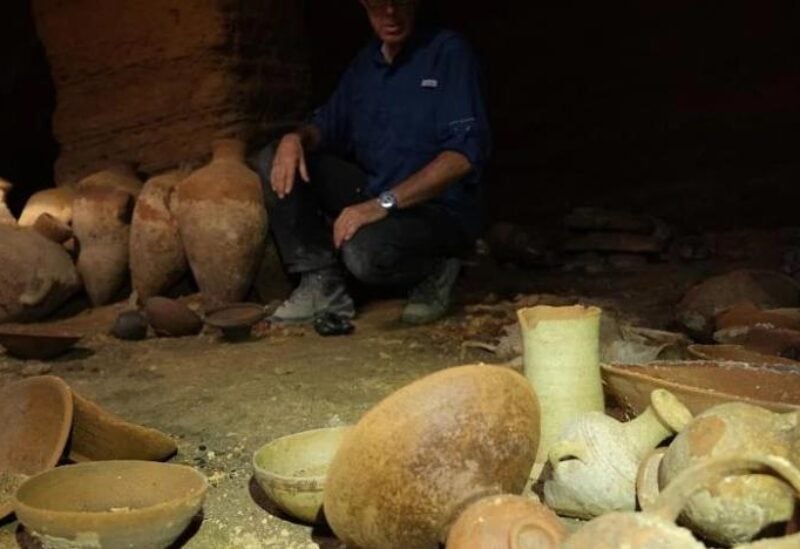 Israeli archaeologists on Sunday announced the “once-in-a-lifetime” discovery of a burial cave from the time of ancient Egyptian Pharaoh Rameses II, filled with dozens of pottery pieces and bronze artifacts.

The cave was uncovered on a beach Tuesday, when a mechanical digger working at the Palmahim national park hit its roof, with archaeologists using a ladder to descend into the spacious, man-made square cave.

In a video released by the Israel Antiquities Authority, gobsmacked archaeologists shine flashlights on dozens of pottery vessels in a variety of forms and sizes, dating back to the reign of the ancient Egyptian king who died in 1213 BC.

Bowls — some of them painted red, some containing bones — chalices, cooking pots, storage jars, lamps and bronze arrowheads or spearheads could be seen in the cave, AFP reported.

The objects were burial offerings to accompany the deceased on their last journey to the afterlife, found untouched since being placed there about 3,300 years ago.

At least one relatively intact skeleton was also found in two rectangular plots in the corner of the cave.

It is an “extremely rare… once-in-a-lifetime discovery”, Yannai said, pointing to the extra fortune of the cave having remained sealed until its recent uncovering.

The findings date to the reign of Rameses II, who controlled Canaan, a territory that roughly encompassed modern day Israel and the Palestinian territories.

The provenance of the pottery vessels — Cyprus, Lebanon, northern Syria, Gaza and Jaffa — is testimony to the “lively trading activity that took place along the coast”, Yannai said in an IAA statement.

Another IAA archaeologist, David Gelman, theorized as to the identity of the skeletons in the cave, located in what is today a popular beach in central Israel.

Regardless of who the inhabitants of the cave were, the find was “incredible,” said Gelman.

“Burial caves are rare as it is, and finding one that hasn’t been touched since it was first used 3,300 years ago is something you rarely ever find,” he said.

“It feels like something out of an Indiana Jones movie: just going into the ground and everything is just laying there as it was initially -– intact pottery vessels, weapons, vessels made out of bronze, burials just as they were.”

The cave has been resealed and is under guard while a plan for its excavation is being formulated, the IAA said.

It noted that “a few items” had been looted from it in the short period of time between its discovery and closure.