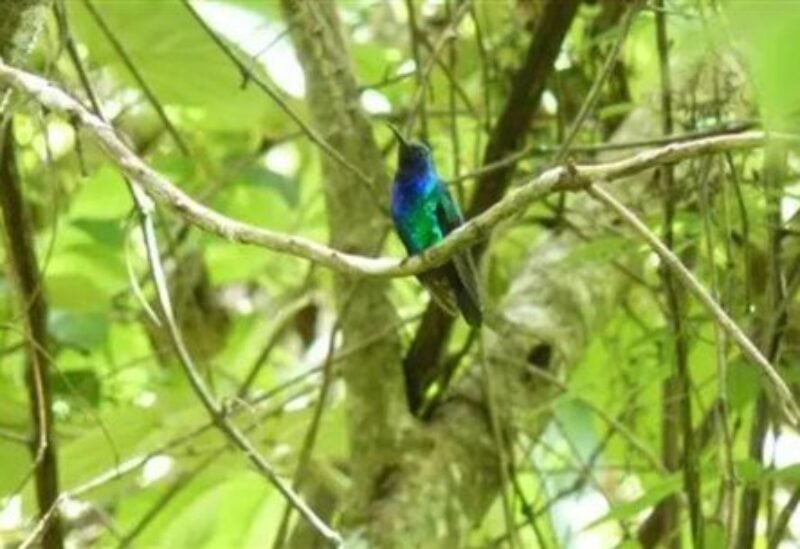 A rare hummingbird has been rediscovered by a birdwatcher in Colombia after going missing for more than a decade.

The Santa Marta sabrewing, a large hummingbird only found in Colombia’s Sierra Nevada de Santa Marta mountains, was last seen in 2010 and scientists feared the species might be extinct as the tropical forests it inhabited have largely been cleared for agriculture.

But ornithologists are celebrating the rediscovery of Campylopterus phainopeplus after an experienced local birdwatcher captured one on camera. It is only the third time the species has been documented: the first was in 1946 and the second in 2010, when researchers captured the first photos of the species in the wild.

Yurgen Vega, who spotted the hummingbird while working with the conservation organisations Selva, ProCAT Colombia and World Parrot Trust to survey endemic birds in Sierra Nevada de Santa Marta, said he felt “overcome with emotion” when he saw the bird.

“The sighting was a complete surprise,” he said. “When I first saw the hummingbird I immediately thought of the Santa Marta sabrewing. I couldn’t believe it was waiting there for me to take out my camera and start shooting. I was almost convinced it was the species, but because I felt so overcome by emotion, I preferred to be cautious; it could’ve been the Lazuline sabrewing, which is often confused with Santa Marta sabrewing. But once we saw the pictures, we knew it was true.”

The Santa Marta sabrewing is listed as critically endangered on the IUCN red list of threatened species and features in the Top 10 “most wanted” list in the conservation organisation Re:wild’s Search for Lost Birds, a worldwide effort to find species that have not been seen for more than 10 years. The bird is so rare and elusive that John C Mittermeier, the director of threatened species outreach at American Bird Conservancy, likened the sighting to “seeing a phantom”.

The hummingbird Vega saw was a male, identified by its emerald green feathers, bright blue throat and curved black bill. It was perched on a branch, vocalising and singing, behaviour scientists think is associated with courtship and defending territory.

The Sierra Nevada de Santa Marta in northern Colombia is home to a wealth of wildlife, including 24 bird species not found anywhere else. But scientists estimate that only 15% of the mountains’ forest is intact. It is hoped the surprise sighting of the Santa Marta sabrewing will help to protect their remaining habitat, benefiting many different species found there.

“This finding confirms that we still know very little about many of the most vulnerable and rare species out there, and it is imperative to invest more in understanding them better,” said Esteban Botero-Delgadillo, the director of conservation science with Selva: Research for Conservation in the Neotropics. “It is knowledge that drives action and change – it is not possible to conserve what we do not understand.

“The next step is going out there and searching for stable populations of this species, trying to better understand where it does occur and what the most critical threats are in situ. Of course, this must involve people from local communities and local and regional environmental authorities, so we can begin a research and conservation programme together that can have real impact.”