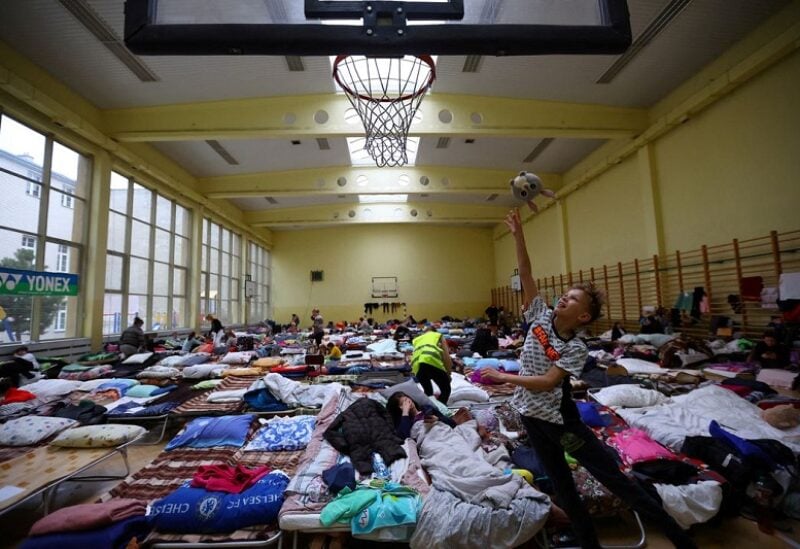 A boy plays basketball with a plush toy inside the sports hall of a primary school, transformed into temporary accommodation for people fleeing the Russian invasion of Ukraine, in Przemysl, Poland, March 8, 2022. REUTERS/Fabrizio Bensch

On Saturday, Ukraine’s neighbors reported a drop in the number of refugees as governments and volunteers scrambled to find shelter for the approximately 2.6 million people who have left since Russia’s incursion two weeks ago, the majority of whom are women and children.

The influx of refugees continues to overburden volunteers, non-governmental organizations, and authorities in eastern Europe’s border communities as well as the major cities where the majority of the refugees seek asylum.

According to Poland’s Border Guard, 76,200 migrants came on Friday, down 13% from the day before. Slovak police reported a similar decline in numbers, with 9,581 persons arriving in Romania, down 22% to 16,348, according to authorities.

On Saturday, fighting erupted northwest of Kyiv, encircling many Ukrainian cities. Attempts to evacuate were jeopardized by bombings and threats of Russian air attacks, according to Ukrainian officials.

According to the mayor of Przemysl, a 60,000-person Polish city near the Medyka border crossing, the number of persons entering has dropped to roughly 18,000 from 23,000 the day before and high of over 50,000.

“I have the structures, but they need to be renovated, which will cost between 10 and 20 million zloty ($2.28 and $4.57 million). Because we have other demands, I won’t be able to support this from the municipal budget; but, monies from the European Union or the government may be available “he stated

Veronika Zhushman, 32, from Vasylkiv in the Kyiv region, had spent the night at a sports gymnasium at a high school in the city with her 6-year-old daughter, mother, and younger sister.

Another refugee’s mobile warning about an explosion awakened her up early Saturday morning.

As of Friday, approximately 2.6 million people had fled Ukraine, with 1.6 million of them travelling to Poland, according to the United Nations refugee agency UNHCR.

Refugees have set their sights on places with established Ukrainian communities and better job opportunities.

According to the city’s mayor, refugees now account for more than 10% of the population of Warsaw, which had a population of 1.8 million before the Russian onslaught.

Bozena Szymanowska, a resident of Olsztyn in northern Poland, just south of the Russian enclave of Kaliningrad, said Ukrainian migrants had stayed away.

“I live in a lovely location, and I can easily accommodate ten guests… Nobody, however, wants to visit Olsztyn. They don’t want to be near the Russians.

185,660 people arrived in Slovakia, with the majority continuing their trek westward. The western route frequently leads to the Czech Republic, where officials estimated 200,000 refugees on Friday.

Scammers providing visa processing and other services in exchange for money, or stealing personal data that may be used to steal or launder money, have been warned by Czech police. They also warned people to be wary of labor proposals that could lead to forced prostitution or human trafficking.

Russia describes its actions in Ukraine as an unique military operation aimed at disarming Ukraine and removing its “neo-Nazi” authorities. Kyiv and its Western supporters argue that this is a spurious excuse for invading a 44-million-strong country.