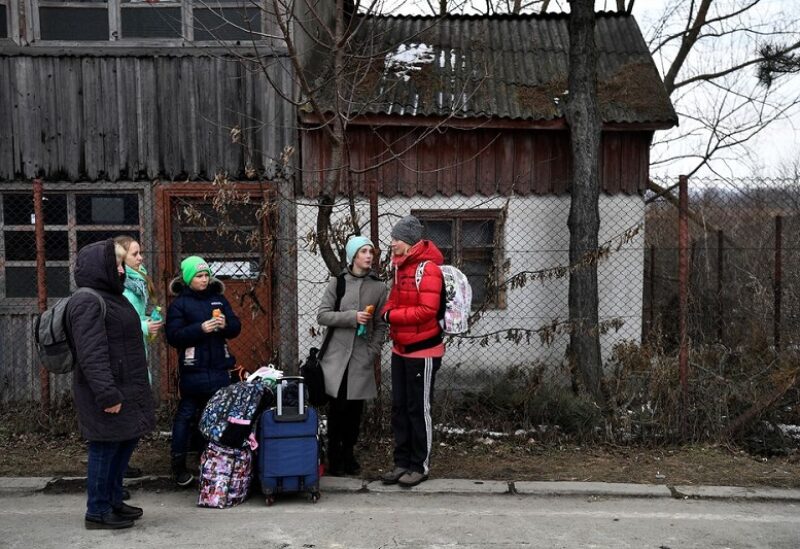 People fleeing what had been the relative safety of western Ukraine joined thousands crossing into eastern Europe on Monday after Russia attacked a Ukrainian base near the border with NATO-member Poland.

Ukraine said 35 people were killed at the base on Sunday. Moscow said up to 180 “foreign mercenaries” died and a large number of foreign weapons were destroyed.

Ukraine also reported renewed air strikes on an airport in the west of the country.

The number of refugees fleeing Ukraine since Russia invaded on Feb. 24 climbed to more than 2.8 million, United Nations data showed on Monday, in what has become Europe’s fastest growing refugee crisis since World War Two.

European Union officials have said 5 million may end up fleeing while others have put the figure higher.

Millions of people have also been displaced inside Ukraine, with many evacuated only as far as the quieter western regions, including to cities like Lviv.

Myroslava, 52, fled her home in the Ternopil region, in western Ukraine, and was waiting in a terminal of Krakow station in Poland to be picked up by acquaintances. She did not know where she would stay.

“We left because of the attack yesterday,” she said, adding that she had hoped western Ukraine would be safe. “We weren’t planning to leave, but as it was so close we decided to.”

Polish Prime Minister Mateusz Morawiecki told a news conference with his counterparts from Ukraine and Lithuania that the attack near its border showed Russia wanted to “create panic among the civilian population”.

Mira from Kyiv, travelling with her mother to Warsaw, said she had been surprised by the Russian attack near Lviv. “I just panicked and felt scared,” she said.

Battles continued around many of Ukraine’s main cities, including the capital Kyiv. Ukraine said it would try to evacuate civilians through 10 humanitarian corridors on Monday.

Russia denies targeting civilians, describing its actions as a “special operation” to demilitarise and “de-Nazify” Ukraine. Ukraine and Western allies call this a baseless pretext for Russia’s invasion of the democratic country of 44 million.

“Houses were blown up,” Alena Kasinyska, a refugee from the town of Mykolaiv, in southern Ukraine, said after crossing into Romania at Isaccea, a busy border crossing in the Danube delta. “People have no place to live, we are scared.”

Ukraine said it had begun “hard” talks on a ceasefire, immediate withdrawal of troops and security guarantees with Russia on Monday.

Both sides reported rare progress at the weekend after earlier rounds primarily focused on ceasefires to get aid to cities under siege by Russian forces and evacuate civilians. Those truces have frequently failed.

Frontline states such as Poland, which has welcomed well over half of the total number fleeing, and Slovakia, Romania, Hungary and Moldova, have taken in the vast majority of the refugees, some of whom have then headed on further west.

Poland’s border guard said about 1.76 million people had entered the country since the fighting started, with 18,400 arriving during the early hours of Monday.

Temporary beds and make-shift canteens have sprung up at convention centers and disused shopping malls around the region while volunteers work long hours handing out free hot drinks and SIM cards, or shuttling refugees further west.

At a youth education center near Auschwitz, normally dedicated to preserving memories of the Holocaust and World War Two, nearly 2,000 meals had been served to refugees in the past couple of weeks.

Further east, an international team of chefs and aid workers in the town Przemysl have served thousands of meals daily to the refugees streaming through Poland’s busiest border crossing, Medyka, located nearby.

“We do a lot of soups because it’s very cold and the refugees that are coming, they cannot carry like a big plate of food because they are carrying all their belongings,” said Clara, a volunteer chef for aid NGO World Central Kitchen.

“We do hot chocolate, we do a lot of baby food as well.”

Sympathy over the plight of their neighbours and deep-set memories of Moscow’s dominance has seen a groundswell of volunteer efforts, but the sheer scale of the refugee crisis has raised fears of being overwhelmed.

Some countries further away from Ukraine’s borders, such as the Czech Republic, have also taken in tens of thousands of refugees, piling pressure on local authorities, while others, like Lithuania, have only just begun to receive significant numbers, with about 1,000 now arriving every day.

“Most of these are women with small children, some with only a handbag for luggage,” said Kristina Meide, director of the Lithuanian Red Cross.