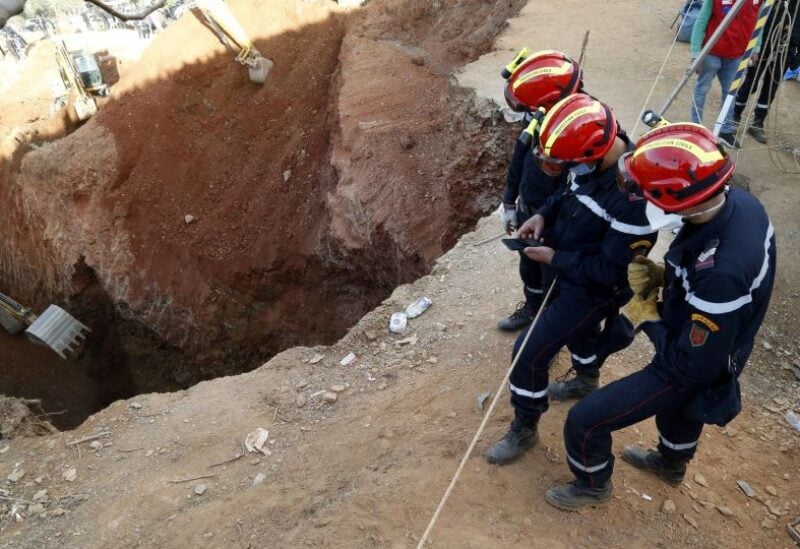 Members of the Moroccan civil defence work to rescue the five-year-old boy Rayan, who is trapped in a deep well for more than 40 hours,

Moroccan rescue personnel moved closer to rescuing a little kid trapped at the bottom of a well on Friday, as part of a cautious effort to dig out big sections of a landslide-prone mountainside.

Rayan, a five-year-old kid, fell down a well in the northern hill town of Chefchaouen on Tuesday, and his suffering has captivated the North African country.

“I beg Moroccans to pray for the safe return of my son,” Rayan’s heartbroken mother said in a video broadcast on Moroccan television. On Friday, state news site SNRT News cited a rescuer as stating the youngster was still alive.

The hole is 32 meters deep and narrows as it drops from its 45cm (18 inch) diameter at the top, making it impossible for the rescuers to go down and collect the youngster.

The steep location of Chefchaouen is very cold in the winter, and while food was sent to Rayan, it was unclear whether he had eaten any.

A tube has also been used to provide him with water and oxygen.

Rescuers used bulldozers all night to carve a big trench into the hill adjacent to the well, creating a gaping crater in the reddish dirt.

A witness told Reuters that once they reach the same depth as the borehole, rescuers may begin digging horizontally to save him.

On Friday, one of the rescue team members informed local media, “We are planning the most essential and hardest rescue step; we need to dig horizontally three to five meters.”

“However, in order to do so, we must stabilize the ground and eliminate the possibility of landslides since we will send a rescue crew and cannot risk their lives.”

A chopper is waiting to take Rayan to the hospital as soon as he is released.