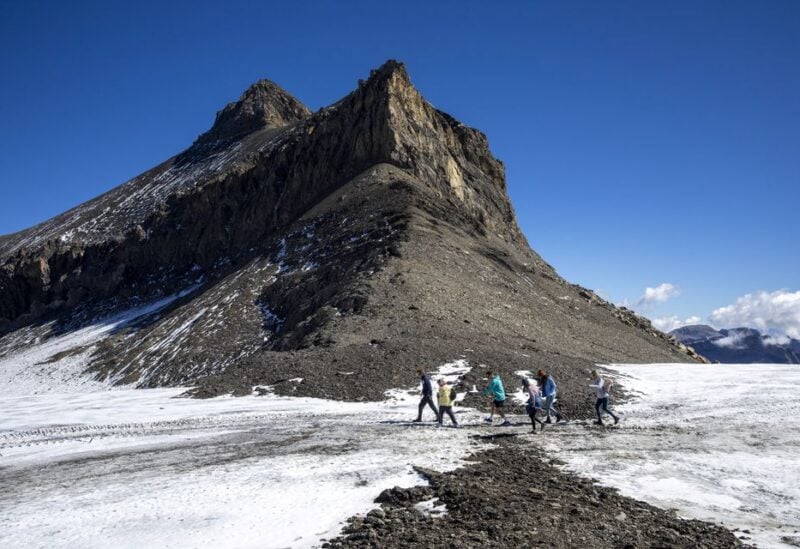 Hikers walk past the newly uncovered Zanfeluron path, as a split of the Sex-Rouge and the Zanfleuron Glacier revealed the path for the first time in 2000 years due to this summer heatwave, at Glacier 3000 in Les Diablerets, Switzerland, September 11, 2022. REUTERS/Denis Balibouse

A rocky Alpine path between two glaciers in Switzerland is emerging for the first time in at least 2,000 years following the hottest European summer on record, according to the local ski resort.

At an elevation of 2,800 meters, bare rock can already be seen between the Scex Rouge and the Zanfleuron glaciers. By the end of this month, the pass will be completely exposed due to this year’s ice melt, according to the ski resort Glacier 3000 in western Switzerland, which reported that the ice melt this year was roughly three times the 10-year average.

“About 10 years ago I measured 15 metres (50 feet) of ice here so all that ice has melted in the meantime,” said Mauro Fischer, a glaciologist at the University of Bern’s Institute of Geography.

“What we saw this year and this summer is just extraordinary and it’s really beyond everything we have ever measured so far,” he added, referring to the speed at which the ice has melted.

Since last winter, which brought relatively little snowfall, the Alps have sweltered through two big early summer heatwaves. The Alps’ glaciers are now on track for their biggest mass losses in at least 60 years of record-keeping, data showed.