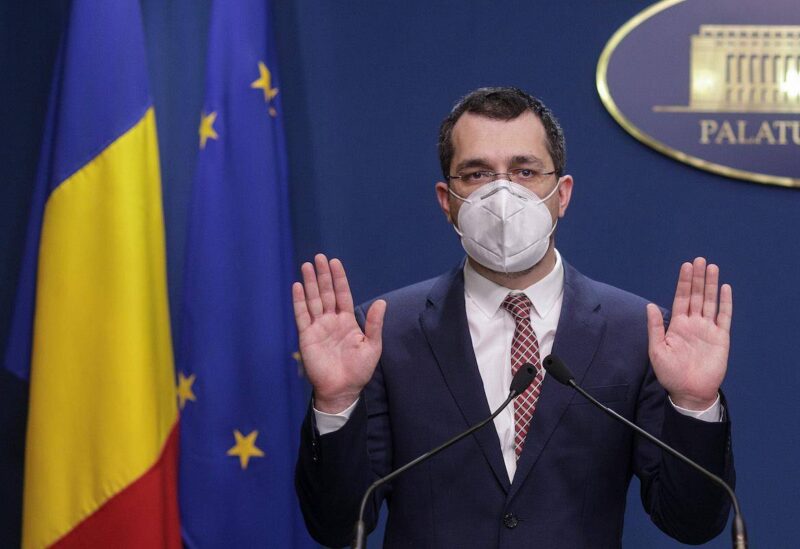 Romanian Prime Minister Florin Citu fired his health minister on Wednesday, saying he wanted to shore up trust in state institutions as they battle the COVID-19 pandemic, but potentially endangering the center-right coalition cabinet.

The dismissal of Health Minister Vlad Voiculescu marks the first major shift in the ruling coalition formed after a December parliamentary election between Citu’s Liberals, center-right grouping USR-Plus – which backs the minister – and the ethnic Hungarian Party UDMR.

The 3 groups can count on nearly 56% of votes in parliament but their majority hinges on party leaders agreeing on governing issues.

“To be successful in fighting the pandemic I have always said there is a need for trust in state institutions,” Citu said on Wednesday after dismissing Voiculescu.

“To ensure trust in state institutions endures, I have decided to make a change at the top of the health ministry. I strongly believe in this governing coalition.”

Citu did not give further details.

Voiculescu, 37, an economist, had vowed to make the healthcare sector and state hospitals more transparent, and has faced a backlash from politicians and politically appointed hospital managers.

Voiculescu was in the process of hiring new heads of county health insurance agencies who control billions of euros in healthcare funds. According to observers, many were chosen because of their political allegiance.

Romania has one of the EU’s least developed healthcare infrastructures. 1 in 4 Romanians has insufficient access to essential healthcare and tens of thousands of physicians and nurses have left for other countries.

Voiculescu did not immediately comment. A cabinet meeting scheduled for Wednesday has been deferred. USR-Plus MPs have called the dismissal an act of aggression.

Two fires and an oxygen tank malfunction at hospitals treating coronavirus patients in November, January and earlier this week killed or wounded dozens.

Even before the pandemic, Romania’s health care system had been under pressure, dogged by corruption, inefficiency and politicized management split between local and central authorities.

Around 13,360 COVID-19 patients were in hospital across Romania on Wednesday, including 1,521 in intensive care units. The country has reported 1.01 million COVID-19 infections and 25,605 fatalities.