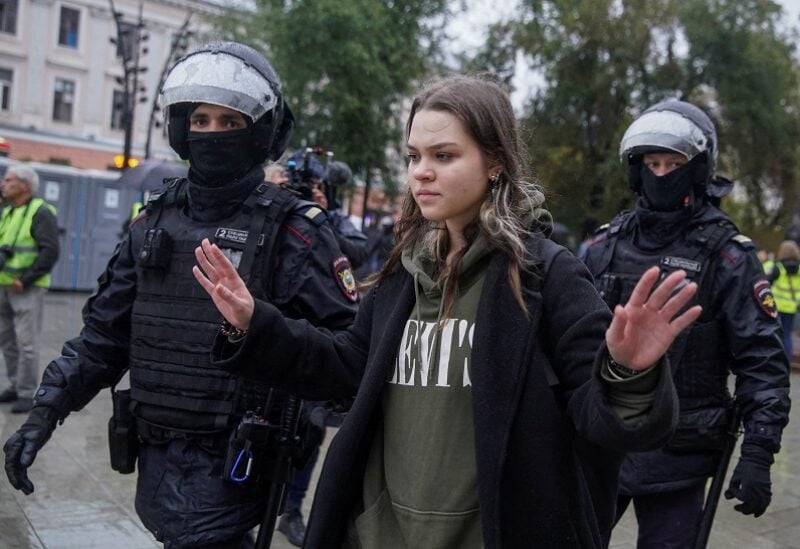 Russian law enforcement officers lead away a person during a rally, after opposition activists called for street protests against the mobilisation of reservists ordered by President Vladimir Putin, in Moscow, Russia September 24, 2022. REUTERS/REUTERS PHOTOGRAPHER

Russia admitted it had rushed the process and promised to fix the mistakes caused during the call-up, nearly a week after announcing the partial mobilisation of troops to fight in Ukraine. Reportedly, upper house speaker Valentina Matviyenko on Sunday came down heavily on the governors overseeing the mobilisation campaigns and directed them to avoid mistakes.

In a statement released on Telegram, Matviyenko admitted that incorrect cases of mobilisation were causing outrage amongst the public.

“Incorrect cases of mobilisation…are provoking fierce reactions in society, and rightly so. Some are assuming that handing in their report (to their superiors) quickly is more important than correctly fulfilling this important mission. This is unacceptable,” said Matviyenko.

“Make sure that partial mobilisation is carried out in full and complete compliance with the criteria. And without a single mistake!,” she added.
Reportedly, after President Vladimir Putin announced a partial troop mobilisation after Ukraine made decisive gains in the ongoing war, the Russian authorities quickly swung into action and started recruiting people.

While Putin said only people with ‘relevant’ skills or military experience needed to be recruited, the authorities took a rather panicked approach.

According to an AFP report, in a case of incorrect recruitment, a 63-year-old diabetic ex-military officer was sent to a training camp in the southwestern region of Volgograd.
Similarly, another 58-year-old school director received a call-up for recruitment, despite having no prior military experience. Both were eventually allowed to return, but it showed that the process was not transparent and clear in its objective.
Succinctly put, military mobilisation refers to a situation when a nation assembles and readies military troops and supplies for war. If a country has ordered a mobilisation, it is organising its armed forces for active military service.

The last time Russia ordered a general mobilisation, anyone who was 19 years old was obliged to join the Soviet Army. Those who were 18 were eligible to volunteer.
Currently, Putin has ordered a partial mobilisation which means that only a certain percentage of Russia’s potential fighters will be asked to join the offensive on Ukraine. As of now, Putin has signed a decree that will see 300,000 reservists who will be called to fight in Ukraine out of approximately 25 million potential fighters at Moscow’s disposal.