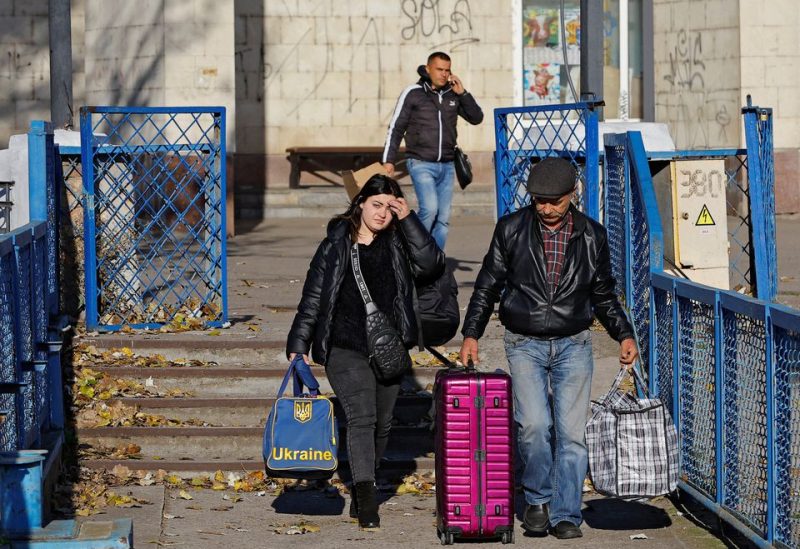 People walk to board a ferry during the evacuation of Kherson residents in the course of Russia-Ukraine conflict, in the city of Kherson, Russian-controlled Ukraine October 31, 2022. REUTERS/Alexander Ermochenko

Russia has ordered civilians to evacuate a swath of Ukraine along the eastern bank of the Dnipro River, extending an evacuation order that Kyiv claims amounts to forced depopulation of occupied territory.

Russia had previously ordered civilians to leave a pocket it controls on the river’s west bank, where Ukrainian forces are advancing to take the city of Kherson. On Tuesday, Russian-installed officials said they were expanding that order to include a 15-kilometer (9-mile) buffer zone along the east bank.

Ukraine says the evacuations include forced deportations from occupied territory, a war crime. Russia, which claims to have annexed the area, says it is taking civilians to safety because of the risk Ukraine might use unconventional weapons.

“Due to the possibility of the use of prohibited methods of war by the Ukrainian regime, as well as information that Kyiv is preparing a massive missile strike on the Kakhovka hydroelectric station, there is an immediate danger of the Kherson region being flooded,” Vladimir Saldo, Russian-installed head of occupied Kherson province, said in a video message.

“The decision (to expand the evacuation zone) will make it possible to create a layered defence in order to repel Ukrainian attacks and protect civilians,” he said.

Moscow has accused Kyiv of planning to use a so-called “dirty bomb” to spread radiation, or to blow up a dam to flood towns and villages in Kherson province. Kyiv says accusations it would use such tactics on its own territory are absurd, but that Russia might be planning such actions itself to blame Ukraine.

The mouth of the wide Dnipro River has become one of the most consequential frontlines in the war in recent weeks.

Russia has thousands of troops in their only pocket on the west bank and has been trying to reinforce the area. Ukraine’s advance has slowed in recent days, with commanders citing increasingly wet and cold weather and tougher terrain.

Saldo identified seven towns on the east bank that would now be evacuated, comprising the main populated settlements along that stretch of the river.

In the city of Kherson on Tuesday streets were virtually empty, with most shops and businesses shuttered. A handful of people at a jetty boarded a ferry to cross to the east bank of the Dnipro, though a few men were still fishing peacefully, apparently indifferent to the distant rumble of artillery fire.

Some residents remained defiant, despite the order to leave.

“Why should I leave?… What for? I will stay here to the very end,” said Ekaterina, a shopkeeper, referring to the house she said her ancestors had built “with their own hands”.

The European Union accused Moscow on Tuesday of launching a new programme to illegally conscript men in Crimea, which Russia seized from Ukraine in 2014, to fight in its forces. The EU statement said Moscow was disproportionately drafting members of Crimea’s indigenous Tatar minority to fight in its war.

Russia’s Defence Ministry said it had completed a mobilisation drive ordered in September by President Vladimir Putin, as 300,000 reservists had been called up and no more were needed.

But the Kremlin said on Tuesday Putin would not issue a new decree formally ending the mobilisation. That has raised concern it could be restarted without notice.

Thousands of Russian men have fled abroad to escape conscription to a conflict which has killed thousands, displaced millions, buffeted the global economy and reopened Cold War-era divisions.

Russia fired a huge volley of missiles at Ukrainian cities on Monday in what Putin called retaliation for an attack on Russia’s Black Sea Fleet at the weekend. Ukraine said it shot most of those missiles down, but some had hit power stations, knocking out electricity and water supplies.

“That’s not all we could have done,” Putin said at a televised news conference.

Putin has also suspended Russia’s cooperation with a programme backed by Turkey and the United Nations to escort cargo ships carrying grain out of the war zone. The three-month-old undertaking had ended a de facto Russian blockade of Ukraine, one of the world’s biggest grain producers, and averted a global food crisis.

Russia’s decision has raised fears that the food crisis could return, but so far a blockade has not been restored. Three vessels left Ukrainian ports on Tuesday morning under the programme, after 12 ships set out on Monday.

The programme’s administrators said Tuesday’s shipments had been agreed by Ukrainian, Turkish and U.N. delegations and that Moscow had been informed, an apparent sign of a willingness to proceed without Russian cooperation.

Turkish President Tayyip Erdogan told Putin in a phone call on Tuesday he was confident about “solution-oriented cooperation” regarding the grain export deal.

Just north of Kherson, Russia fired four missiles into the Ukrainian port city of Mykolaiv overnight, demolishing half an apartment building. Reuters saw rescue workers recover the body of an elderly woman from the rubble.

As rush hour got underway, passersby walked past a two-storey school, the front of which had been torn off by the force of a blast from another missile that left a massive crater.

“This is what the barbarian horde does,” said Irena Siden, 48, the school’s deputy director, standing in front of the gutted building as workers began clearing the rubble.