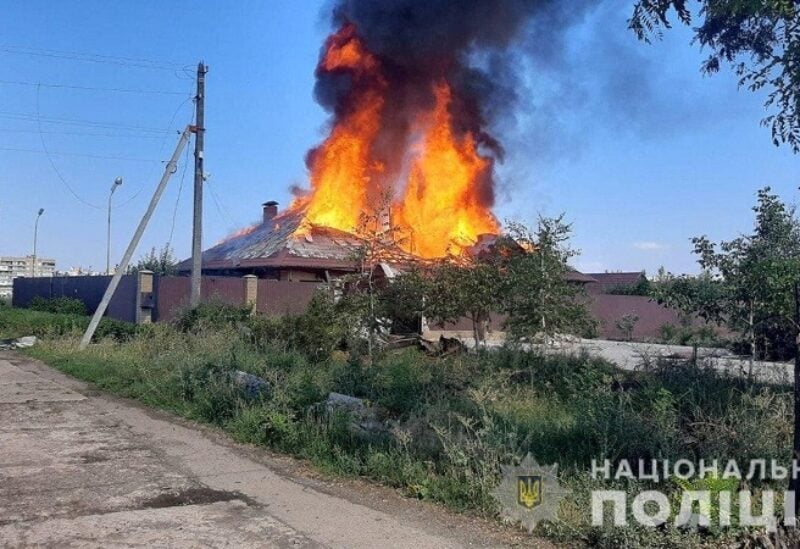 A view shows burning residential house hit by a Russian air strike, as Russia's attack on Ukraine continues, in Donetsk region, in the town of Bakhmut, Donetsk region, Ukraine July 27, 2022. Press service of the National Police of Ukraine/Handout via REUTERS ATTENTION EDITORS - THIS IMAGE HAS BEEN SUPPLIED BY A THIRD PARTY. DO NOT OBSCURE LOGO.

Russia claimed it had annexed Ukraine’s second-biggest power plant in the eastern Donetsk region, as fighting continues in Ukraine

Russia has deployed its forces in the southern region even as President Zelensky’s government claimed grain export is set to restart soon. Ukraine claimed it had bombed a key bridge in southern Ukraine controlled by Russian forces.
Ukraine has said it wants to recapture Kherson amid reports of massive Russian redeployment in the region. Russian forces reportedly attacked Mykolaiv city with rocket launchers as President Zelensky’s forces attacked a bridge in Dnipro river in Kherson.
As the war continues to rage in Ukraine, US Secretary of State Antony Blinken said he is likely to have a phone call with Russian foreign minister Sergei Lavrov which would be the first diplomatic engagement between the two top diplomats ever since Russian President Vladimir Putin declared “special military operation” against Ukraine on February 24.

Blinken however added that it won’t be a “negotiation” on Ukraine. Russia and Ukraine had concluded a deal on the export of wheat and other grain from the Black Sea ports after months of wrangling however a missile attack in the area put deal in jeopardy even as efforts are underway to begin transporting grain to the international market.

Russia has also cut gas supply to Europe amid large-scale sanctions as Germany said gas supply has dropped to 20 per cent. Russia blamed EU sanctions for the drop in supply as Europe braces for further energy cutbacks.