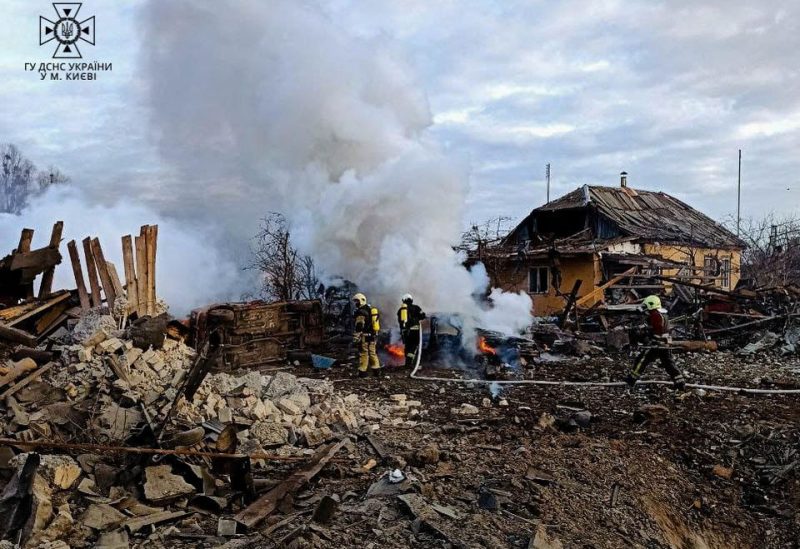 Rescuers work at a site of private houses heavily damaged by a Russian missile strike, amid Russia's attack on Ukraine, in Kyiv, Ukraine, in this handout picture released December 29, 2022 - REUTERS

Just hours after morning airstrikes that targeted crucial infrastructure in Kyiv and the eastern city of Kharkiv, Russia launched a second round of missiles at Ukraine on Saturday, causing people to take cover as sirens blared across the nation.

Authorities in Mykolaiv, Lviv in the west, and Odesa on the Black Sea reported air defenses were attempting to shoot down approaching missiles. The central Vynnytsa region was the scene of explosions, according to Ukrainian national television Suspilne.

Moscow, which invaded last February, has been pounding Ukraine’s energy infrastructure with missiles and drones since October, causing sweeping blackouts and disruptions to central heating and running water as winter bites.

The second attack on Saturday came hours after Reuters journalists heard a series of blasts in Kyiv in the morning before the air raid siren even sounded, which is highly unusual. The extent of any damage or casualties in the second wave was not yet clear.

No one was reported hurt following the first wave, but missile debris caused a fire in one place and houses were damaged outside the capital, officials said.

“An infrastructure facility was hit. No critical damage or fire. All emergency services are working at the site. No one is wounded,” Kyiv’s military administration said in a statement.

Ukrenergo, which runs the power grid, said its workers were racing to fix the damage and that the network was grappling with a power deficit caused by earlier attacks even though it was -2 Celsius (28 Fahrenheit) in Kyiv, only mildly cold.

According to the mayor of Kiev, missile debris that fell on a non-residential area in the Holosiivskiy district of western Kiev caused a fire but no one was injured.

In the area close outside the city, in the village of Kopyliv, residential infrastructure was also damaged. The bomb destroyed or damaged the windows and roofs of 18 privately owned homes, according to Oleksiy Kuleba, the regional governor.

Russian missiles, according to Air Force spokesperson Yuriy Ihnat, were likely shot in a high, looping ballistic trajectory from the north, which would account for why the air raid alarm did not sound.

He told the online publication Ukrainska Pravda that Ukraine lacks the capability to detect and intercept ballistic missiles.