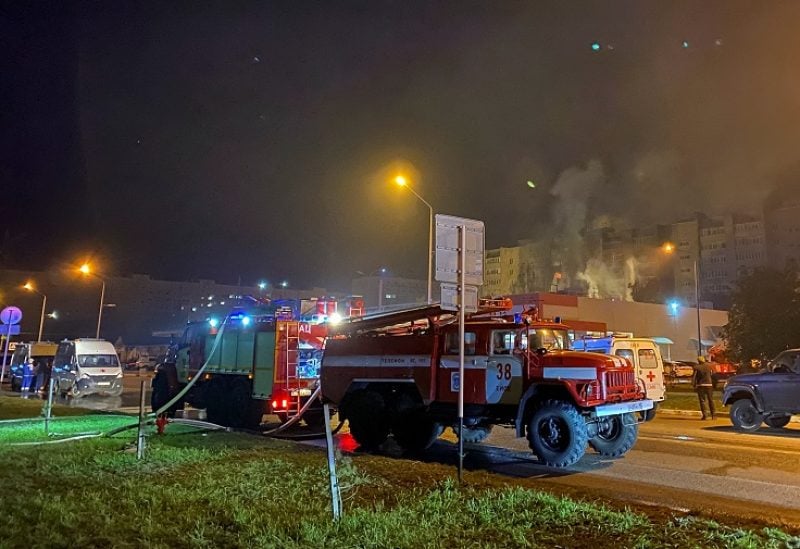 Firefighters work at a site of a plane crash into residential building in the southern city of Yeysk, Russia October 17, 2022. REUTERS/Stringer NO RESALES. NO ARCHIVES

13 people were killed when a military aircraft crashed into a residential building in the port town of Yeysk in Russia’s southwestern Krasnodar Krai region on Monday evening, according to local authorities.
Yeysk is located on the Azov Sea coast near Russia’s border with Ukraine. The town has around 90,000 inhabitants and is home to a Russian air base.

The Kremlin said President Vladimir Putin had been informed of the incident, and had ordered the health and emergency ministers to fly to the region. He ordered “all necessary assistance” to be given to those affected by the incident, Russian news agency TASS reported.

What damage did the crash cause?

Several hours after the crash, Krasnodar Krai Governor Veniamin Kondratyev said emergency services had managed to put out the fire.

Deputy Governor Anna Minkova had initially said that three people had died and another 10 had been taken to hospital. The death toll was later revised to six, with six others missing.

On Tuesday, with search operations complete, the death toll stood at 13.

Kondratyev added his administration was “providing maximum assistance” to residents and promised to figure out the situation with the damaged apartments.
The Defense Ministry said that the aircraft crashed during a training flight from a military airfield. The Ministry said that both crewmembers evacuated the plane successfully.

RIA cited the Defense Ministry as saying that the pilots had reported that the jet had malfunctioned after one of its engines caught fire on takeoff. The ministry added that aircraft’s fuel caught fire after it hit the apartment building.

Shortly after the announcement of the crash, Russia’s Investigative Committee said it had opened a criminal case and sent investigators to the scene of the incident.

Before the incident, Russia had seen 9 reported non-combat crashes of warplanes since the start of Moscow’s invasion of Ukraine on February 24. In June, a military aircraft crashed in the city of Ryazan, located southeast of Moscow, killing four people and injuring five.