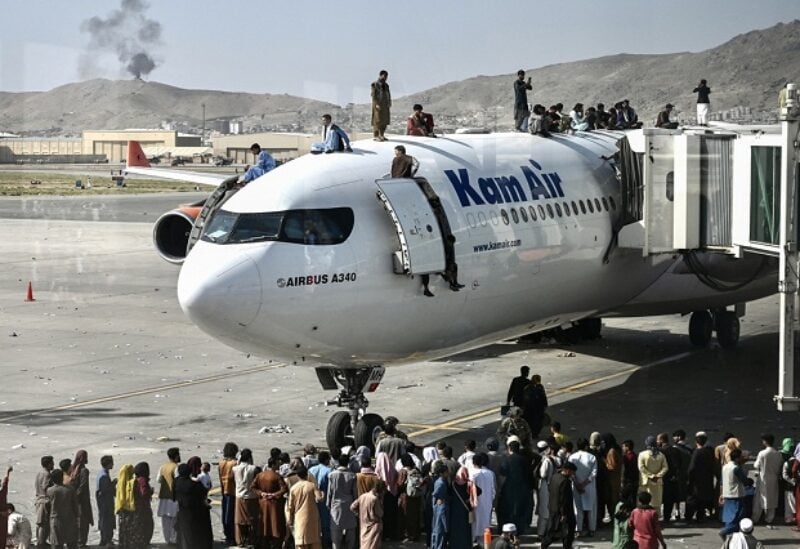 Afghan people climb atop a plane as they wait at the Kabul airport in Kabul on August 16, 2021, after a stunningly swift end to Afghanistan's 20-year war, as thousands of people mobbed the city's airport trying to flee the group's feared hardline brand of Islamist rule. (Photo by Wakil Kohsar / AFP)

The Russia’s Defense Ministry declared that three Russian air planes set off for Afghanistan on Thursday to deliver humanitarian aid and to evacuate people willing to leave the war-torn country
The II-76 aircraft are expected to unload cargo at the airport in Kabul and then take on board over 380 people who are citizens of Russia, Belarus, Kyrgyzstan, Armenia, Ukraine and Afghanistan, the ministry said in a statement.
“Medical and nursing teams of military medical staff with the necessary medical equipment and medicines travel on board each Russian military transport aircraft to provide the necessary medical care and support to evacuated citizens of Russia and other countries,” the ministry said.
Each aircraft also has sufficient supply of drinking water, blankets, and individual food rations, the statement added.
Asked why Russia decided to organize the evacuation, Kremlin spokesman Dmitry Peskov said the necessity arose due to the “extremely restless” situation in the country.
Thousands of people have fled Afghanistan after the Taliban took control of Afghanistan weeks after US withdrawal from the country.