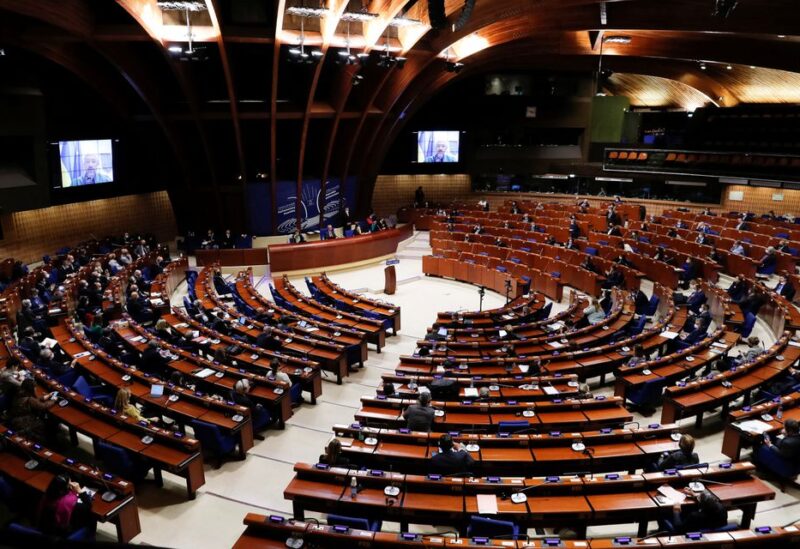 Ukrainian Prime Minister Denys Shmyhal addresses the Parliamentary Assembly of the Council of Europe via videolink, in an extraordinary session to discuss Russia's invasion of Ukraine, in Strasbourg, France March 14, 2022.

Russia resigned from the Council of Europe, a human rights watchdog based in Strasbourg, on Tuesday, averting possible expulsion over its attack on Ukraine.

Pyotr Tolstoy, the Russian delegation’s head at the Council’s Parliamentary Assembly, announced on his Telegram channel that he had handed over a letter from Foreign Minister Sergei Lavrov announcing Moscow’s decision.

The Council of Europe, which is independent of the European Union and exists to protect human rights and the rule of law, suspended Russia’s membership on February 25, the day after it invaded Ukraine.

Moscow said last week that the U.S.-led NATO alliance and EU countries were undermining the Council and Russia would no longer participate.

On Monday, Ukrainian Prime Minister Denys Shmygal urged the Council to expel Russia, telling the assembly that those responsible for “this unprovoked and unjustified aggression cannot stay in the single European family where human life is the highest value”.

The Kremlin said last month that Russia’s suspension was unfair, but provided a good reason to “slam the door” for good on the organization, giving Moscow an opportunity to restore the death penalty for dangerous criminals.

Russia describes its invasion of Ukraine as a “special operation” to demilitarize and “denazify” Ukraine and prevent a genocide of Russian-speakers. Ukraine and Western allies call this a baseless pretext for a war of choice.

The Council was founded in 1949 in an attempt to enshrine human rights in Europe’s post-war order. It drew up the European Convention on Human Rights, which in turn established the European Court of Human Rights. Russia joined in 1996.

Leonid Slutsky, head of the International Affairs Committee of Russia’s lower house of parliament, said the countries of NATO and the EU had seen the Council as “a means of ideological support for their military-political and economic expansion to the east”.

Russia would now withdraw from the Human Rights Convention.

“But don’t be afraid,” he wrote on his Telegram channel. “All rights will be guaranteed in our country, necessarily and unconditionally.”