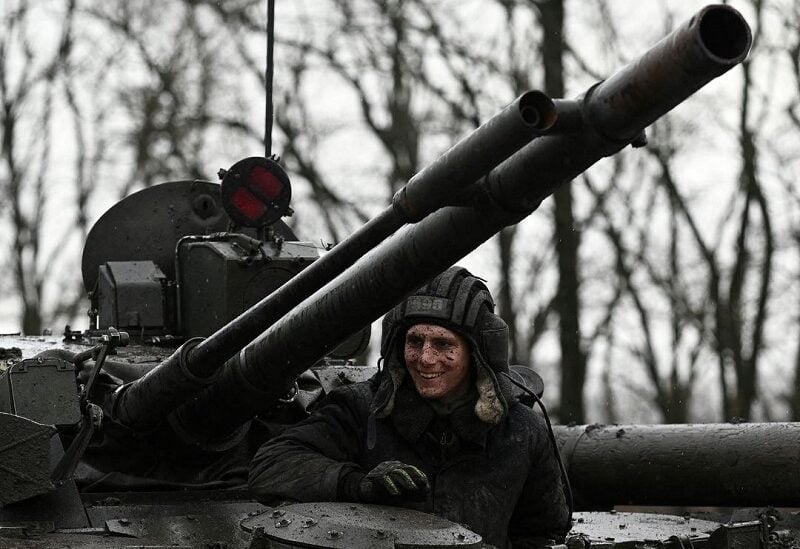 A Russian service member is seen on a BMP-3 infantry fighting vehicle during drills held by the armed forces of the Southern Military District at the Kadamovsky range in the Rostov region, Russia February 3, 2022. REUTERS/Sergey Pivovarov

Russia started the active phase of military drills in Belarus on Thursday as Britain launched new diplomacy in a standoff over Ukraine, warning Moscow that going to war with its neighbour would be disastrous for Russia, Ukraine and Europe.

U.S. officials have warned that Russia may attack Ukraine after massing troops near its borders, and have accused Moscow of raising tensions further by holding joint military exercises in Belarus with what NATO says is Russia’s biggest deployment to the country since the Cold War.

Russia denies planning an attack, and says it has the right to move its troops as it sees fit across its own territory, and that of its allies with their agreement. It says its military exercises are defensive in nature.

Mirroring the military exercises in Belarus, Ukraine launched its own war games on Thursday that, like Russia’s Allied Resolve drills, will run until Feb. 20.

The Ukrainian forces, whose numbers have not been disclosed, are set to use Bayraktar drones and anti-tank Javelin and NLAW missiles provided by foreign partners. Kyiv was due to receive a further shipment of U.S. military aid later on Thursday.

“Fundamentally, a war in Ukraine would be disastrous for the Russian and Ukrainian people and for European security and together NATO has made it clear that any incursion into Ukraine would have massive consequences and carry severe costs,” she said.

Lavrov said Moscow was open to improving dire relations between Britain and Russia.

“Of course we can only normalise relations through mutually respectful dialogue… Ideological approaches, ultimatums, threats, morality lectures are a road to nowhere,” he said.

‘LINES IN THE SNOW’

Britain also hoped to use a visit to NATO headquarters by Prime Minister Boris Johnson to underline European solidarity as Moscow seeks guarantees that Ukraine, a former Soviet republic, will never be allowed to join NATO.

“As an alliance we must draw lines in the snow and be clear there are principles upon which we will not compromise,” Johnson said. “That includes the security of every NATO ally and the right of every European democracy to aspire to NATO membership.”

After French President Emmanuel Macron met Russian President Vladimir Putin in Moscow on Monday, some Russian experts have said there are tentative signs that the former KGB spy wants t avoid an escalation of the Ukraine crisis.

The United States and the European Union have threatened Russia with sanctions if it attacks Ukraine, building on steps taken after Russia annexed Crimea and backed separatists fighting government forces in eastern Ukraine in 2014.

The Kremlin’s point man on Ukraine, Dmitry Kozak, was set to meet officials from Ukraine, Germany and France in Berlin for the latest talks on the conflict in eastern Ukraine.

Ukrainian Foreign Minister Dmytro Kuleba said the talks would be important and that he hoped they could get a Trilateral Contact Group on the conflict in east Ukraine functioning again. The group includes Russia, Ukraine and the Organization for Security and Cooperation in Europe, a security watchdog.

French Foreign Affairs Minister Jean-Yves Le Drian said agreeing at the talks to continue discussions would be a positive signal.

Six Russian warships have arrived at Sevastopol in Crimea, which Russia annexed from Ukraine in 2014, bulking up Moscow’s forces in the Black Sea ahead of planned naval drills, Russian officials said.