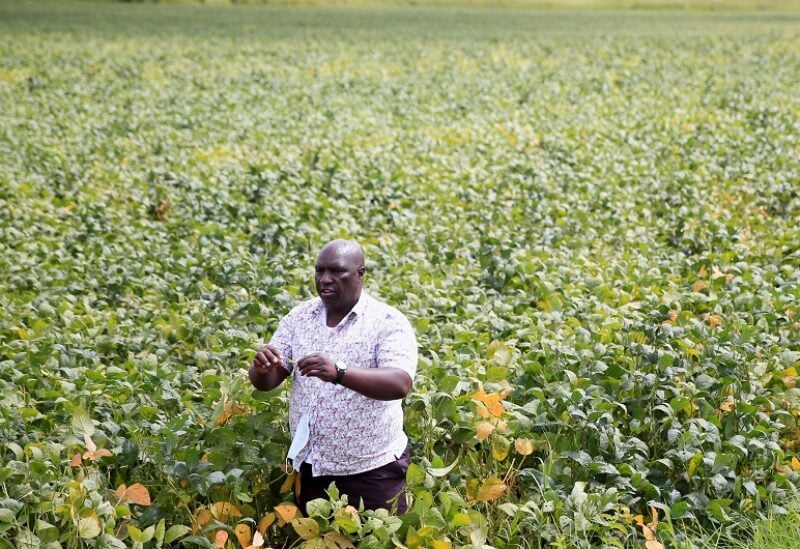 A farmer Boniface Mutize gestures during an interview with Reuters at his soya beans farm in Domboshava, a village in the province of Mashonaland East outside Harare, Zimbabwe, March 21,2022. Picture taken March 21, 2022. REUTERS/Philimon Bulawayo

Although it is facing harsh sanctions by Western countries for launching a war against Ukraine in February, Russia continues to make inroads across Africa, signing bilateral and commercial deals.

“The sanctions that the NATO states have imposed on Russia for attacking Ukraine will find very few supporters in Africa,” Dr. Mustafa Mheta, head of the Africa desk and a fellow at the Johannesburg-based think tank Media Review Network (MRN), told Anadolu Agency in an interview.

This week, Zimbabwe and Russia committed to deepen and expand their bilateral relations during the fourth session of the Zimbabwe-Russia Intergovernmental Commission (ICG) on economic, trade, scientific and technical co-operation held in the capital Harare.

Meanwhile in April, Cameroon signed a strategic military deal with Russia, becoming the first African nation to do so since the Kremlin launched its offensive in Ukraine.

“Many countries across Africa are signing deals with Russia. It’s for the simple reason that Russia, like China, does not interfere in the affairs of its clients and treats them as equal and sovereign partners,” Mheta said.

The defense cooperation agreement reached between Moscow and Cameroon is aimed at helping the Central African nation fight against piracy and train its troops in combating terrorism among other things.

“Sanctions imposed on Russia are not by the United Nations with a universal impact. That’s why Russia and some African countries are signing deals,” Dirk Kotzé, a politics professor at the University of South Africa, told Anadolu Agency.

Kotzé also believes that it’s easier for Russia to sign cooperation agreements with governments that are less democratic on the continent.

“Governments with questionable democracies on the continent don’t have to go into much decision making for them to pass a deal with another country compared to those with very democratic processes,” he said, adding it’s the choice of each country to choose who to cooperate with or not.

Kotzé said the Russia-Ukraine war has created blocs on the continent, with some countries voting at the United Nations General Assembly in either support of Russia, against its invasion, or abstaining.

Sultan Kakuba, a political scientist at Uganda’s Kyambogo University, agreed that the conflict has indeed created blocs in Africa.

He said many countries in the continent purchase their military equipment from Russia and some are reminded that Russia played a role in the struggle for the independence of many countries.

Kakuba said most of the countries in Africa have a history of being active members of the Non-Aligned Movement (NAM).

Founded in 1961, the NAM, a forum of 120 developing countries, had of late lost relevance after the Cold War. These countries have committed themselves to maintaining strategic autonomy and avoiding being part of political power blocs.

On Thursday, Russian Presidential Special Representative for the Middle East and Africa Mikhail Bogdanov told Interfax that Africa has always been an important region for Russia from the point of view of foreign policy as well as trade and economic and humanitarian cooperation.

He said many Africans had studied at Russian universities between the 1950s and 60s. Bogdanov also said that Russia stood with many African countries in their struggle for independence and thus this is the foundation for the restoration of Russia-Africa ties. He said they hope to see many Russian companies working in Africa.