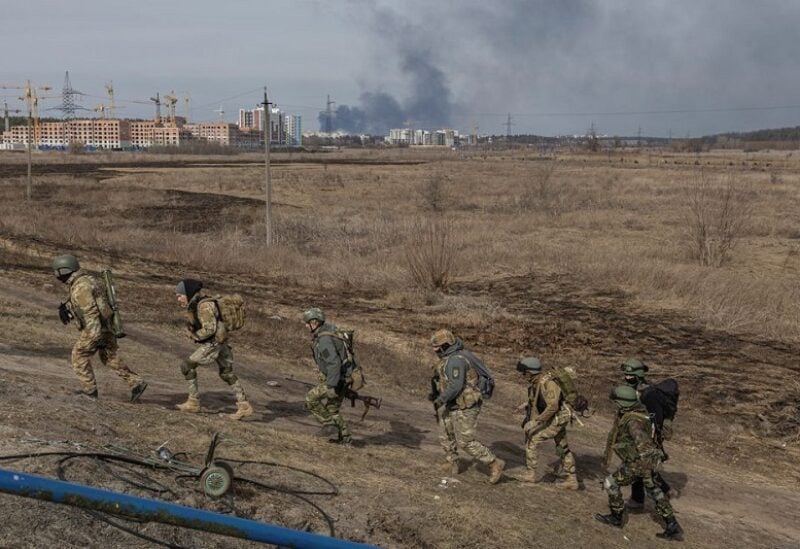 Ukrainian servicemen walk near a destroyed bridge as Russia's invasion of Ukraine continues, in the town of Irpin outside Kyiv, Ukraine, March 12, 2022. REUTERS/Marko Djurica

Foreign military instructors have previously worked at the base, Ukraine said. It was not clear whether any were there at the time.

Regional governor Maksym Kozytskyy said Russian planes fired around 30 rockets at the Yavoriv International Center for Peacekeeping and Security, adding that some were intercepted before they hit.

The 360 square-km (140 square-mile) facility less than 25 km (15 miles) from the Polish border, is one Ukraine’s biggest and the largest in the western part of the country.

Reuters was unable immediately to verify the report. The Kremlin did not immediately reply to a request for comment on the missile strike so close to the border with NATO.

Nineteen ambulances with sirens on were seen by Reuters driving from the direction of the Yaroviv facility after the strike and and black smoke rose from the area.

“Russia has attacked the International Center for Peacekeeping & Security near Lviv. Foreign instructors work here. Information about the victims is being clarified,” Ukrainian Defence Minister Oleksii Reznikov said in an online post.

A Ukrainian defence ministry representative told Reuters the ministry was still trying to establish if any foreign instructors were at the centre at the time of the attack.

Ukraine held most of its drills with NATO countries there before the invasion. The last major exercises were in September.

In the weeks before Russia invaded on Feb. 24, the Ukrainian military trained there, but according to Ukrainian media, all foreign instructors left the training ground in mid-February, while leaving all the equipment.

Russia’s invasion of Ukraine, launched by President Vladimir Putin on Feb. 24, has sent more than 2.5 millions fleeing across borders and trapped thousands of people in besieged cities.

While Western nations have sought to isolate Putin by imposing harsh sanctions, the United States and its allies are concerned to avoid NATO being drawn into the conflict.

The mayor of another city in western Ukraine, Ivano-Frankivsk, said Russian troops also continued to hit its airport, with no initial reports of casualties.

In eastern Ukraine, Russian troops are trying to surround Ukrainian forces as they advance from Kharkiv in the north and Mariupol in the south, the UK Defence Ministry said on Sunday.

“Russian forces advancing from Crimea are attempting to circumvent Mykolaiv as they look to drive west towards Odessa,” the ministry said in an intelligence update posted on Twitter.

Air raid sirens again woke residents in Kyiv on Sunday morning, hours after Ukrainian President Volodymyr Zelenskiy warned Russian forces they face a fight to the death if they try to occupy the capital.

“If they decide to carpet bomb and simply erase the history of this region … and destroy all of us, then they will enter Kyiv. If that’s their goal, let them come in, but they will have to live on this land by themselves,” Zelenskiy said on Saturday.

Ukraine accused Russian forces on Saturday of killing seven civilians, including one child, in an attack on women and children trying to flee fighting near Kyiv.

Reuters was unable immediately to verify the report and Russia offered no immediate comment.

‘NEED TO HOLD ON’

“We still need to hold on. We still have to fight,” Zelenskiy said in a video address late on Saturday, his second of the day.

The United States said it would rush up to $200 million in additional small arms, anti-tank and anti-aircraft weapons to Ukraine, where officials have pleaded for more military aid.

The Kremlin describes its actions as a “special operation” to demilitarise and “deNazify” Ukraine. Ukraine and Western allies call this a baseless pretext for a war of choice that has raised fears of wider conflict in Europe.

In comments reported by the Tass news agency, Ryabkov made no specific threat. Any attack on such convoys before they reached Ukraine would risk widening the war.

Crisis talks between Moscow and Kyiv have been continuing by video link, said Kremlin spokesperson Dmitry Peskov, according to Russia’s RIA news agency. He gave no details, but Ukrainian Foreign Minister Dmytro Kuleba said Kyiv would not surrender or accept any ultimatums.

Russian troops have destroyed 3,687 Ukrainian military infrastructure facilities so far, Russian Defence Ministry spokesman Igor Konashenkov was quoted by Russian news agencies as saying on Sunday. It was not possible to independently verify his statement.

The Donetsk region’s governor said constant shelling was complicating bringing aid into Mariupol. Fires were burning in the western section of the city and dozens of apartment buildings heavily damaged, according to images taken on Saturday by private U.S. satellite firm Maxar.