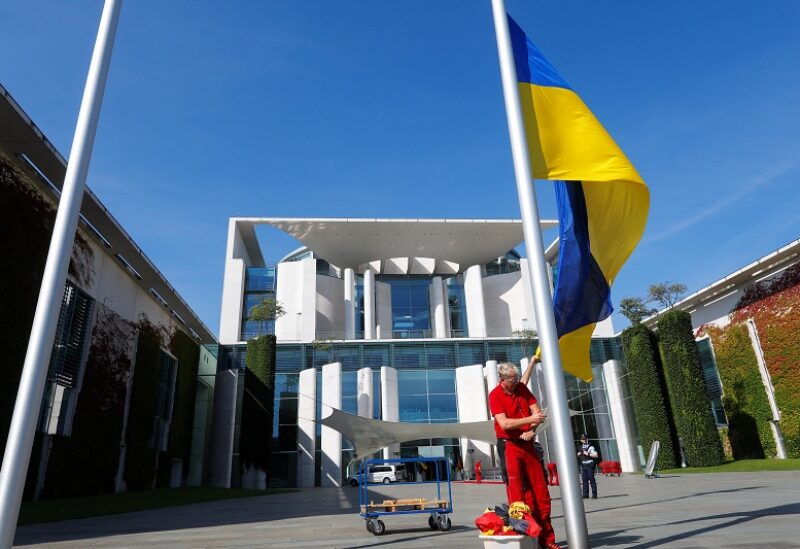 An employee puts a Ukrainian flag on a mast outside of a building of the German Chancellery ahead of visit of Ukrainian Prime Minister Denys Shmyhal, in Berlin, Germany September 4, 2022. REUTERS/Michele Tantussi

“The bulk of our new aid, €200 million, is to go to a program run by the Ukrainian government to support internally displaced persons,” Schulze told the Funke Media group on Sunday.

“The money is intended to help ensure that the displaced people in Ukraine can continue to provide themselves with the most basic necessities,” she added.

Ukrainian Prime Minister Denys Shmyhal, who is set to visit Berlin on Sunday, will meet Schulze as well as German Chancellor Olaf Scholz.

“I will speak to Prime Minister Shmyhal about how we can continue to support the Ukrainian government in caring for the displaced people,” Schulze said.

Around 7 million people have been internally displaced in Ukraine since Russia’s invasion began in late February, according to the United Nations International Organization for Migration
Russia preparing ‘decisive blow’ in energy sector — Zelenskyy
Ukrainian President Volodymyr Zelenskyy has accused Russia of waging an energy war and is planning a “decisive blow” for the winter.

“Russia is trying these days to increase the energy pressure on Europe even more; The pumping of gas through Nord Stream has been completely stopped,” Zelenskyy said in his nightly address.

“Russia wants to destroy the normal life of every European — in all countries of our continent,” Zelenskyy warned while calling for greater unity in Europe.

Deceiving the enemy is an important tactic in war. Throughout history, military strategy has involved the use of dummies — be it fake guns, tanks, airplanes, or soldiers. DW takes a look at military deception in the Ukrainian context.