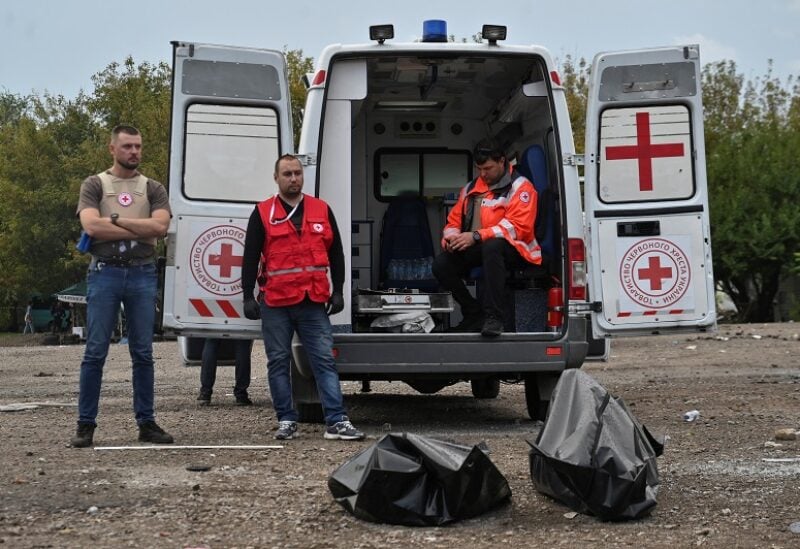 Red Cross volunteers stand next to the covered bodies of persons killed by a Russian missile strike that hit a convoy of civilian vehicles amid Russia's attack on Ukraine, after Russia held what it called referendums – votes that were denounced by Kyiv and Western governments as illegal and coercive – in Zaporizhzhia, Ukraine September 30, 2022. REUTERS/Stringer

It comes After Ukrainian President Volodymyr Zelenskyy accused the ICRC of inaction in upholding the rights of Ukrainian prisoners of war, the International Committee of the Red Cross (ICRC) says it shares “frustration” about incomplete access to prisoners of the war in Ukraine.

Zelenskyy said that no one had yet visited theOlenivka prisonin Russian-occupied Donetsk where dozens of Ukrainian POWs died in an explosion and fire in July.

The head of the Ukrainian president’s office, Andriy Yermak, said on Thursday that Kyiv was giving the ICRC three days to send a mission to the Olenivka.

ICRC spokesperson Ewan Watson said that “our teams are ready on the ground and have been ready for months to visit the Olenivka penal facility and any other facility where POWs are held.”

“Beyond being granted access by high levels of authority, this requires practical arrangements to materialize on the ground. We cannot access by force a place of detention of internment where we have not been admitted.”

He said the ICRC “have been able to visit hundreds of POWs on both sides, but there are thousands more who we have not been able to see,” adding there were limits on what it can do.

Here are the other main headlines from the war in Ukraine on July 14.

Speaking at a news conference in the Kazakh capital Astana he said “those who are saying this are smart enough not to take such steps,” without expanding on his comments.

NATO leaders have repeatedly said they are not looking for a direct confrontation with Russia.

Putin also saw “no need” for talks with US President Joe Biden and said that he had not yet taken a decision on attending a Group of 20 Summit in Indonesia next month.

The Russian leader said he had “no” regrets about the war in Ukraine.

“What is happening today is not pleasant. But all the same, (if Russia hadn’t attacked on February) we would have been in the same situation, only the conditions would have been worse for us. So we’re doing everything right,” he said.

Putin said there was no need for more ‘massive’ missile strikes against Ukraine.

That’s despite the increased and continued Russian bombardment of Ukraine this week.

The Russian leader also sounded confident about the call up of an extra 300,000 reservists to fight in Ukraine saying it should be completed in two weeks.

He added that he didn’t forsee “any additional need [for troops] in the foreseeable future.

The call-up, announced by Putin in September, has proved hugely unpopular in Russia, where almost all men under the age of 65 are
registered as reservists.