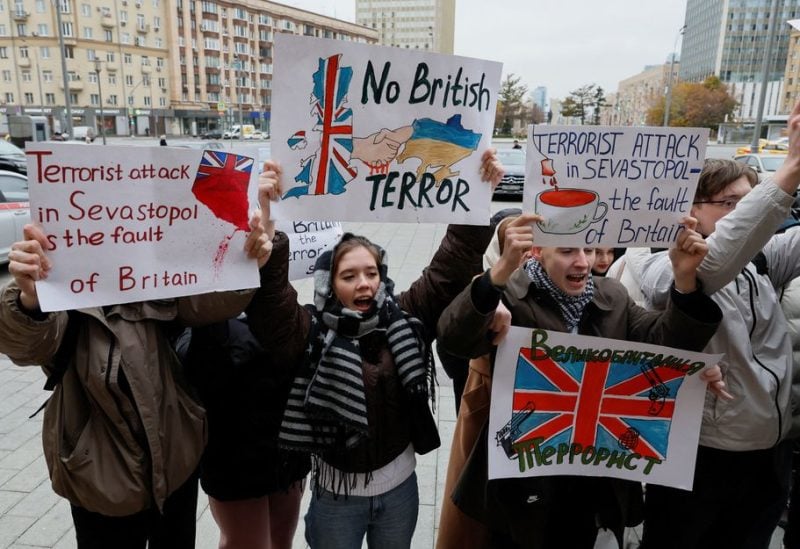 Activists hold a protest against what Russia's officials said to be the involvement of British specialists in a Ukrainian drone strike on its Black Sea Fleet in Crimea, as British Ambassador to Russia Deborah Bronnert arrives at the Russian Foreign Ministry headquarters in Moscow, Russia November 3, 2022. REUTERS

In response to its claim that British experts were involved in a Ukrainian drone strike on Russia’s Black Sea Fleet in Crimea, the British ambassador was summoned, according to the Russian Foreign Ministry, which said on Thursday that it had issued a complaint to her.

The ministry issued a statement saying, “The demarche highlighted that such hostile measures by the British risked to aggravate the situation and could lead to unforeseeable and deadly results.”

Ambassador Deborah Bronnert arrived at the foreign ministry shortly after 10:30 a.m. as a small crowd chanted anti-British slogans and held placards reading “Britain is a terrorist state”. She left after around 30 minutes.

Russian Foreign Ministry spokeswoman Maria Zakharova had said the ambassador was to be summoned over Saturday’s drone attack on Crimea, which Russia unilaterally annexed from Ukraine in 2014.

The statement noted that Britain had been training Ukrainian service personnel for some time. It said this had included the training of divers in “deep-sea sabotage skills”.

Britain denies carrying out the attack, but makes no secret of the fact that it has been helping to train Ukrainian armed forces and arming them.

Russia casts Britain as a particularly perfidious Western power, which President Vladimir Putin says is plotting to destroy Russia and carve up its vast natural resources.

After Russia invaded Ukraine, Britain, along with the United States and the European Union, imposed some of the most severe sanctions in history and supplied weapons to help Ukraine.

Russia’s defence ministry has also said that British navy personnel blew up the Nord Stream gas pipelines in September, a claim that London said was false and designed to distract from Russian military failures in Ukraine.