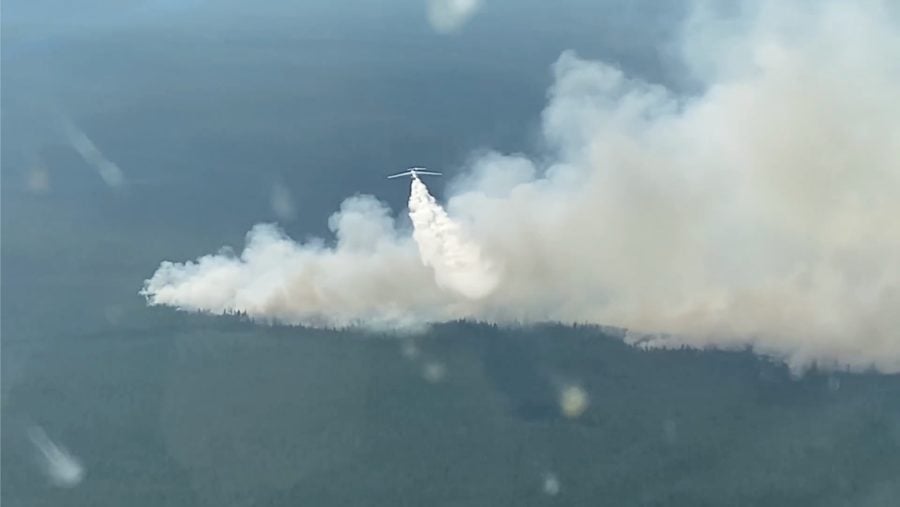 A plane makes a water drop to fight a forest fire in the region of Yakutia in eastern Siberia, Russia, in this still image taken from video released July 14, 2021. Ministry of Defence of the Russian Federation/Handout via REUTERS

On Wednesday, Russian Military helicopters dropped firefighters on the Siberian wildfires, blaming the record blazes on climate change, according to the Kremlin.

Fires raged through nearly 800,000 hectares of Russian forestland, engulfing swaths of Yakutia’s northeastern area. The efforts of almost 2,000 firefighters on the ground have been hampered by a heat wave and high winds.

A Russian air force Mi-8 military helicopter carried out reconnaissance flights to identify the worst-affected areas of Yakutia and transported units of firefighters as thick smoke billowed up from the forest.

“My heart bleeds watching these resources dying. It’s really painful looking at this when you think how long it’s going to take to be restored,” Mikhail Bubnov, an engineer, told Reuters on the helicopter during a flight.

Fires tear through Russian forestland every year, but they have become more intense in recent seasons amid unusually high temperatures across the northern Siberian tundra.

The Mi-8 helicopter was unable to dump water to douse the flames on Wednesday due to poor visibility caused by smoke. Yakutia has been in a state of emergency since June.

On the ground, firefighters’ work is grueling.

Local residents have petitioned for President Vladimir Putin to send more resources and equipment to the region to help the effort, complaining that smoke had been particularly difficult for older residents and patients with COVID-19.

Putin has since ordered the military to help local authorities fight the fires and the army deployed water-dropping Ilyushin Il-76 aircraft to douse the flames, the Defense Minister said on Tuesday.

The Kremlin on Wednesday dismissed criticism that Russian planes had helped foreign countries like Greence and Turkey battle wildfires while Russia itself was burning.

It said Russian authorities had filled regional shortfalls in firefighting hardware with equipment from other regions, but that the fires were worse than they used to be and hard to predict.

“…the natural processes caused by climate change are unfortunately so strong that we are experiencing burning that did not previously take place,” Kremlin spokesman Dmitry Peskov said.

While fires rage through forests, the country has struggled under a heatwave that has broken several temperature records in western Russia. Moscow reached 33.1 degrees Celsius, its hottest July 13 in 85 years.