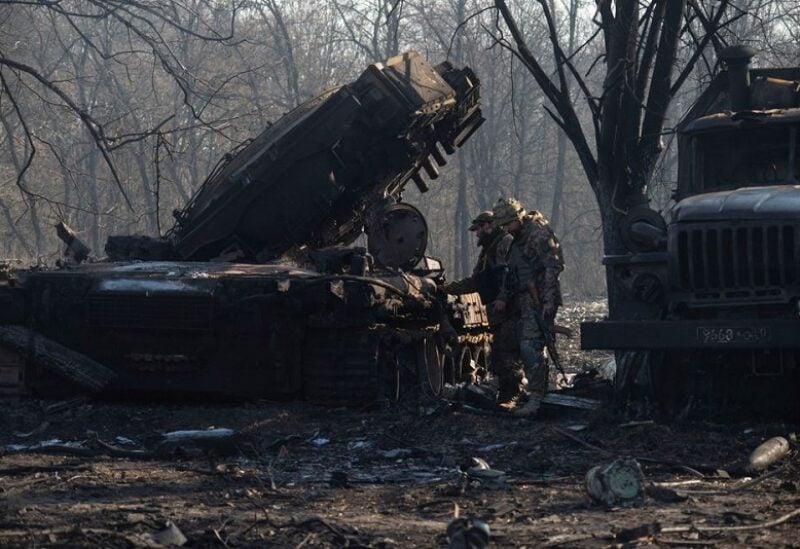 Russian forces have taken control of a town where workers at the defunct Chernobyl nuclear plant live, the governor of Kyiv region said on Saturday, and fighting was reported in the streets of the besieged southern port of Mariupol.

After more than four weeks of conflict, Russia has failed to seize any major Ukrainian city and on Friday Moscow signalled it was scaling back its military ambitions to focus on territory claimed by Russian-backed separatists in the east.

However, intense fighting was reported in a number of places on Saturday, suggesting there would be no swift let-up in the conflict, which has killed thousands of people, sent some 3.7 million abroad and driven more than half of Ukraine’s children from their homes, according to the United Nations.

Russian troops seized the town of Slavutych, which is close to the border with Belarus and is where workers at the Chernobyl plant live, the governor of Kyiv region, Oleksandr Pavlyuk, said.

He added that the soldiers had occupied the hospital and kidnapped the mayor. Reuters could not independently verify the reports.

Slavutych sits just outside the so-called exclusion zone around Chernobyl – which in 1986 was the site of the world’s worst nuclear disaster – where Ukrainian staff have continued to work even after the plant itself was seized by Russian forces soon after the start of the Feb. 24 invasion.

On the other side of the country, in Mariupol, Mayor Vadym Boichenko said the situation in the encircled city remained critical, with street fighting taking place in the centre.

The city has been devastated by weeks of Russian fire.

In an address on Saturday to Qatar’s Doha Forum, Ukrainian President Volodymyr Zelenskiy compared the destruction of Mariupol to the destruction inflicted on the Syrian city of Aleppo by combined Syrian and Russian forces in the civil war.

“They are destroying our ports,” Zelenskiy said, warning of dire consequence if his country – one of the world’s major grains producers – could not export its foodstuffs. “The absence of exports from Ukraine will deal a blow to countries worldwide.”

Speaking via video link, he also called on energy producing countries to increase their output so that Russia cannot use its massive oil and gas wealth to “blackmail” other nations.

Zelenskiy late on Friday pushed for further talks with Moscow after the Russian Defence Ministry said a first phase of its operation was mostly complete and that it would now focus on the Donbass region bordering Russia, which has pro-Moscow separatist enclaves.

Breakaway Russian-backed forces have been fighting Ukrainian forces in Donbass since 2014.

Moscow has until now said its goals for what it calls its “special military operation” include demilitarising and “denazifying” its neighbour. Ukraine and its Western allies have called that a baseless pretext for an unprovoked invasion.

In what officials billed as a major address, U.S. President Joe Biden on Saturday will underscore the West’s commitment to support the people of Ukraine and hold Russia accountable for the conflict, the White House said.

Biden is visiting Poland, which has taken in many of the refugees streaming out of the country.

The United Nations has confirmed 1,081 civilian deaths and 1,707 injuries in Ukraine since the invasion but says the real toll is likely higher. Some 136 children have been killed so far during the invasion, Ukraine’s prosecutor general office said on Saturday.

Footage from Mariupol, home to 400,000 people before the war, showed destroyed buildings, burnt out vehicles and shell-shocked survivors venturing out for water and provisions. Residents have buried victims in makeshift graves as the ground thaws.

Ukraine’s deputy prime minister, Iryna Vereshchuk, said an agreement had been reached to set up 10 humanitarian corridors on Saturday to evacuate civilians from front line hotspots.

Speaking on national television, she said civilians trying to leave Mariupol would have to travel by private cars as Russian forces were not letting buses through their checkpoints. Reuters could not independently verify this information.

More than 100,000 people still need to be evacuated from the Mariupol, Vereshchuk said.

To the north, battle lines near the capital Kyiv have been frozen for weeks with two main Russian armoured columns stuck northwest and east of the city.

A British intelligence report on Saturday said Russian forces were relying on indiscriminate air and artillery bombardments rather than risk large-scale ground operations.

“It is likely Russia will continue to use its heavy firepower on urban areas as it looks to limit its own already considerable losses, at the cost of further civilian casualties,” the latest British assessment said.