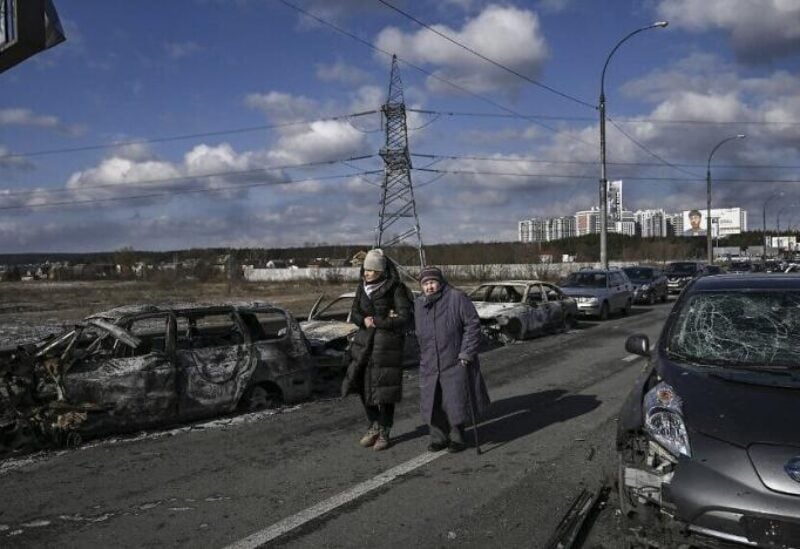 Russian forces pressed their assault on Ukrainian cities Friday, with new missile strikes and shelling on the capital Kyiv and the outskirts of the western city of Lviv, as world leaders pushed for an investigation of the Kremlin’s repeated attacks on civilian targets, including schools, hospitals and residential areas.

The early morning barrage of missiles on the outskirts of Lviv was the closest strike yet to the center of the city, which has become a crossroads for people fleeing from other parts of Ukraine and for others entering to deliver aid or fight.

Black smoke billowed for hours after the explosions, which hit a facility for repairing military aircraft near the city’s international airport, only six kilometers (four miles) from the center. One person was wounded, the regional governor, Maksym Kozytskyy, said.

Multiple blasts hit in quick succession around 6 a.m., shaking nearby buildings, witnesses said. The missiles were launched from the Black Sea, but the Ukrainian air force’s western command said it had shot down two of six missile in the volley. A bus repair facility was also damaged, Lviv’s mayor Andriy Sadovyi said.

Lviv lies not far from the Polish border and well behind the front lines, but it and the surrounding area have not been spared Russia’s attacks. In the worst, nearly three dozen people were killed last weekend in a strike on a training facility near the city. Lviv’s population has swelled by some 200,000 as people from elsewhere in Ukraine have sought shelter there.

Early morning barrages also hit a residential building in the Podil neighborhood of Kyiv, killing at least one person, according to emergency services, who said 98 people were evacuated from the building. Kyiv mayor Vitali Klitschko said 19 were wounded in the shelling.

Two others were killed when strikes hit residential and administrative buildings in the eastern city of Kramatorsk, according to the regional governor, Pavlo Kyrylenko.

In city after city around Ukraine, hospitals, schools and buildings where people sought safety have been attacked. Rescue workers searched for survivors in the ruins of a theater that served as a shelter when it was blown apart by a Russian airstrike in the besieged southern city of Mariupol Wednesday.

In Kharkiv, a massive fire raged through a local market after shelling Thursday. One firefighter was killed and another injured when new shelling hit as emergency workers fought the blaze, emergency services said.

The World Health Organization said it has verified 43 attacks on hospitals and health facilities, with 12 people killed and 34 injured.

US Secretary of State Antony Blinken said Thursday that American officials were evaluating potential war crimes and that if the intentional targeting of civilians by Russia is confirmed, there will be “massive consequences.”

She said many of the daily attacks battering Ukrainian cities “are reportedly indiscriminate” and involve the use of “explosive weapons with a wide impact area.” DiCarlo said the devastation in Mariupol and Kharkiv ”raises grave fears about the fate of millions of residents of Kyiv and other cities facing intensifying attacks.”

Hundreds of civilians were said to have taken shelter in a grand, columned theater in the city’s center when it was hit Wednesday by a Russian airstrike. On Friday, their fate was still uncertain, with conflicting reports on whether anyone had emerged from the rubble. Communications are disrupted across the city and movement is difficult because of shelling and fighting.

“We hope and we think that some people who stayed in the shelter under the theater could survive,” Petro Andrushchenko, an official with the mayor’s office, told The Associated Press Thursday. He said the building had a relatively modern basement bomb shelter designed to withstand airstrikes. Other officials said earlier that some people had gotten out.

Video and photos provided by the Ukrainian military showed the at least three-story building had been reduced to a roofless shell, with some exterior walls collapsed. Satellite imagery on Monday from Maxar Technologies showed huge white letters on the pavement outside the theater spelling out “CHILDREN” in Russian — “DETI” — to alert warplanes to the vulnerable people hiding inside.

Russia’s military denied bombing the theater or anyplace else in Mariupol on Wednesday.

Ukraine’s emergency services said a mother, father and three of their children, including 3-year-old twins, were killed when a Chernihiv hostel was shelled. Civilians were hiding in basements and shelters across the embattled city of 280,000.

“The city has never known such nightmarish, colossal losses and destruction,” Chaus said.

Ukrainian President Volodymyr Zelenskyy said early Friday he was thankful to President Joe Biden for additional military aid, but he would not get into specifics about the new package, saying he did not want Russia to know what to expect. He said when the invasion began on Feb. 24, Russia expected to find Ukraine much as it did in 2014, when Russia seized Crimea without a fight and backed separatists as they took control of the eastern Donbas region.

Instead, he said, Ukraine had much stronger defenses than expected, and Russia “didn’t know what we had for defense or how we prepared to meet the blow.”

In a joint statement, the foreign ministers of the Group of Seven leading economies accused Russian President Vladimir Putin of conducting an “unprovoked and shameful war,” and called on Russia to comply with the International Court of Justice’s order to stop its attack and withdraw its forces.

Both Ukraine and Russia this week reported some progress in negotiations. Zelenskyy said he would not reveal Ukraine’s negotiating tactics.

“Working more in silence than on television, radio or on Facebook,” Zelenskyy said. “I consider it the right way.”

Putin spoke by phone Friday with German Chancellor Olaf Scholz, who urged the Russian president to agree to an immediate cease-fire and called for an improvement to the humanitarian situation, a spokesman for Scholz said.

In a statement about the call, the Kremlin said Putin told the German chancellor that Ukraine had “unrealistic proposals” and was dragging out negotiations. The Kremlin also said it was evacuating civilians, and accused Ukraine of committing war crimes by shelling cities in the east.

While details of Thursday’s talks were unknown, an official in Zelenskyy’s office told the AP that on Wednesday, the main subject discussed was whether Russian troops would remain in separatist regions in eastern Ukraine after the war and where the borders would be.

The official, speaking on condition of anonymity to discuss the sensitive talks, said Ukraine was insisting on the inclusion of one or more Western nuclear powers in the negotiations and on legally binding security guarantees for Ukraine.

In exchange, the official said, Ukraine was ready to discuss a neutral military status.

Russia has demanded that NATO pledge never to admit Ukraine to the alliance or station forces there.

The fighting has led more than 3 million people to flee Ukraine, the UN estimates. The death toll remains unknown, though Ukraine has said thousands of civilians have died.