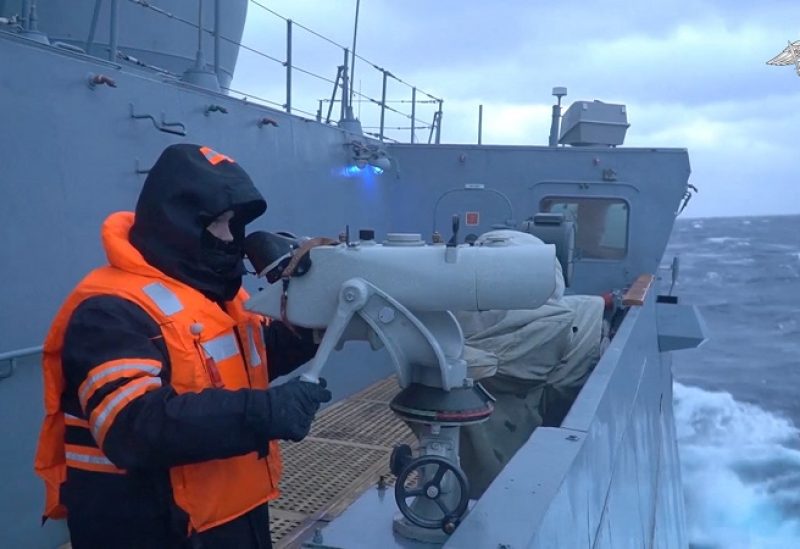 A still image from video, released by the Russian Defence Ministry, shows what it said to be frigate 'Admiral of the Fleet of the Soviet Union Gorshkov' armed with hypersonic cruise weapons during an air defence exercise in the Norwegian Sea, in an image taken from video released January 10, 2023. Russian Defence Ministry/Handout via REUTERS ATTENTION EDITORS - THIS IMAGE WAS PROVIDED BY A THIRD PARTY. NO RESALES. NO ARCHIVES. MANDATORY CREDIT. WATERMARK FROM SOURCE.

The Russian defense ministry said on Tuesday, that a Russian warship armed with hypersonic cruise weapons has held exercises in the Norwegian Sea.
“The crew of the frigate ‘Admiral of the Fleet of the Soviet Union Gorshkov’ conducted an air defense exercise in the Norwegian Sea,” the ministry said.
“The crew… conducted an exercise to repel the means of an air attack of a simulated enemy in the Norwegian Sea.”
Last week, President Vladimir Putin sent the frigate to the Atlantic Ocean armed with new generation hypersonic cruise missiles, a signal to the West that Russia will not back down over the war in Ukraine.
The frigate is armed with Zircon missiles which Russia says fly at nine times the speed of -+
1,000 km.
Russia sees the weapons as a way to pierce increasingly sophisticated US missile defenses which Putin has warned could one day shoot down Russian nuclear missiles.
Former Russian President Dmitry Medvedev last week warned the United States that the hypersonic missiles would soon be close to NATO’s shores.