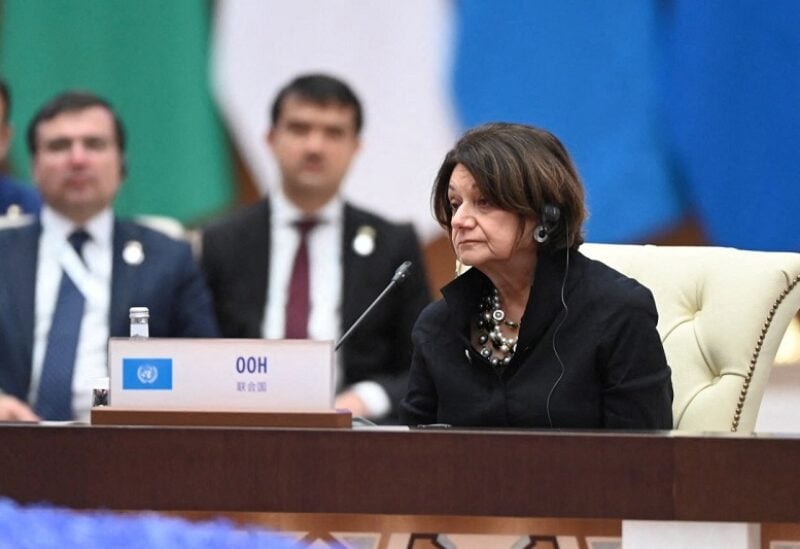 U.N. Under-Secretary-General for Political Affairs Rosemary DiCarlo attends an extended-format meeting of heads of the Shanghai Cooperation Organization (SCO) member states at a summit in Samarkand, Uzbekistan September 16, 2022. Foreign Ministry of Uzbekistan/Handout via REUTERS ATTENTION EDITORS - THIS IMAGE WAS PROVIDED BY A THIRD PARTY. NO RESALES. NO ARCHIVES. MANDATORY CREDIT.

“Unilateral actions aimed to provide a veneer of legitimacy to the attempted acquisition by force by one State of another State’s territory, while claiming to represent the will of the people, cannot be regarded as legal under international law,” UN’s political chief, Rosemary DiCarlo, told the UN Security Council.

Russian state media announced that 98% of voters voted to join Russia following referendums in the Kherson, Zaporizhzhia, Donetsk and Luhansk regions of Ukraine.

DiCarlo said the UN remains fully committed to the sovereignty, unity, independence and territorial integrity of Ukraine and demanded that Russia, under international law, respect the laws of Ukraine in its occupied territories.

Ukrainian President Volodymyr Zelenskyy told the 15-member Security Council that Russia’s referendums are an attempt to steal territory and erase the norms of international law and called for the complete isolation of Russia.

“This is a very cynical attempt to force the male population in the occupied territories of Ukraine to mobilize into the Russian army…to fight against their homeland,” said Zelenskyy.

He said if Russia annexes occupied Ukrainian territories in sham referendums, it will mean there is nothing to talk about with Russian President Vladimir Putin.

Zelenskyy accused Russia of waging a “genocidal policy” and keeping the world one step from a nuclear disaster.

He demanded Russia be excluded from all international organizations.

US envoy to the UN Linda Thomas-Greenfield said Washington would present a draft resolution in the Security Council condemning what she called “sham” referendums in the breakaway regions of Ukraine.

Thomas-Greenfield said if Russia vetoes the draft resolution, Washington will look to the General Assembly to discuss the veto.

She urged states not to recognize any altered status of Ukraine and demanded that Russia withdraw its troops.

Russian envoy to the UN Vassily Nebenzia defended the Moscow-backed referendums in the occupied regions of Ukraine, saying they were held ”transparently,” respecting international norms.